As London beckons Rafael Nadal, could this be his year to complete the set?

Rafael Nadal is on course to qualify for the ATP World Tour Finals. So, could this finally be his year? 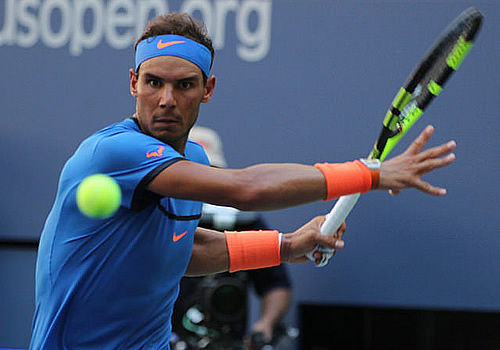 Even if Rafael Nadal never played another match, the extraordinary Spaniard has put together such a complete resume of achievements that he would of necessity remain in any conversation about the greatest players in this sport.

He is joint second on the list of Grand Slam champions, 14, behind only Roger Federer. He is second only to Novak Djokovic in Masters titles, 28. He has won all the Majors and all but two of the Masters—and has made the finals of the other two as well. He has also won three doubles Masters titles—Federer has one, Djokovic none.

Nadal has four times been part of Spain’s Davis Cup winning squad and has won Olympic gold in both singles and doubles.

He is one half of the most played rivalry in tennis—with Djokovic—and one half of perhaps the most famous rivalry of the Open era—with Federer. And with the Swiss, Nadal has been one of the ‘big four’ since they were just two. For between them, Federer and Nadal held the No1 and 2 rankings from the summer of 2005 for six years. And Nadal went on to add almost a year more at No1 from 2013.

Yet among the top ranks of men’s tennis, Nadal has suffered more injuries than any, to such an extent that, even before he turned 25, many were beginning to question whether the Spaniard’s body, and especially his knees, could survive the pounding of his uniquely physical baseline game.

Take 2008, the year he went from the Hamburg title to the French Open, Queen’s, Wimbledon and Toronto without losing a match—across three different surfaces. He then slotted in a gold medal in Beijing before a semi run at the US Open, followed by two Davis Cup match-wins.

Through it all, both knees were strapped, and by the end-of-year indoor season, with 82 wins to his name, he was forced to call a halt at the Paris Masters.

The next summer, he withdrew from Queen’s and Wimbledon with tendonitis in both knees, and at the start of 2010, retired in his quarter-final at the Australian Open with a knee injury. Come 2012, and the picture looked still worse: He took no further part in the season after losing in the second round at Wimbledon.

Could his body really recover again? 2013 gave the answer: Nadal returned from a seven-month absence to win 10 titles from 14 finals, and ended the year at No1 for the third time. Not only was his body back to its best—and with not a bit of strapping in sight—but he made the final of the World Tour Finals for only the second time in his career.

But that tournament, the prestigious culmination of the tennis season, has proved to be the ‘big one’ that eludes the Spaniard. He has qualified among the elite eight every year since 2005, but four times failed to take part through injury or illness.

2015 brought some respite, a complete season set off by the clay of South America, for the red dirt has been like a warm blanket to the Spaniard—a surface kinder on his body and his knees.

The records say it all. Nine times Nadal has won Roland Garros, Monte-Carlo and Barcelona, and at one point, he had an 81-match winning streak on clay. No wonder he became a passionate advocate of a change of surface for the World Tour Finals.

For this end-of-year event, coming as it does after the European indoor hard-court swing, has been played in that same environment every year since Nadal first qualified.

On his way to the final in London in 2013, he admitted: “It is not only fatigue [that stopped me winning this event]. One of the main reasons is because I never have been a fantastic player on indoors. Since 2005, all the Masters Cup was indoors and that was not the best for me… we qualify in all sorts of places, and in my opinion… [it would be] more fair for players, and more interesting for fans, to change places every year.”

The World Tour Finals, though, will remain at the O2 until 2018, but this year, something else has changed.

Again in 2016, Nadal has overcome injury woes. A wrist injury forced him to withdraw during the French Open and miss the entire summer until the Rio Olympics. There, he ended up playing 11 matches in eight days, a total of almost 23 hours, to win doubles gold and reach the singles semis.

He was clearly exhausted by Cincinnati just days later, and he stressed that physical recovery after so long away took time: He lost in the fourth round at the US Open.

But come Beijing this week, he has played fewer than 50 matches: And that enforced mid-season break may leave him in better physical shape than many of his rivals. After all, Djokovic and Stan Wawrinka have withdrawn from Beijing, Kei Nishikori retired in Tokyo, Federer is absent for rehab after knee surgery—and the list grows by the week.

But something else as changed. Nadal’s serve is just one element in a drive towards increasingly aggressive, forward-moving tennis. He has always been efficient at the net, but now he is using those skills to shorten points and reduce the toll on his 30-year-old body. So much so that, of Beijing’s quicker hard courts, he said this week:

It reaped quick rewards in his opener against Paolo Lorenzi: He hit 22 winners to two by the Italian, conceding just two games.

There has now been one more clue to Nadal’s reconciliation with—and evolution to—the tour’s hard courts. For the last four springs, he has played South America’s ‘Golden Swing’, a trend that eased him back into tennis after his eight-month 2012/13 injury absence. It was his first return there in eight years, and proved to be a triumph: two titles plus the final in Vina del Mar, and he won titles in 2014 and 2015 too—but not this year.

So in 2017, he is ringing the changes by staying in Europe to play Rotterdam’s indoor hard event.

His reasons are revealing. Of South America: “I enjoyed a lot in South America…[But] the weather conditions, in my opinion, are a little bit too much to practise the sport. Last couple years I really don’t enjoy it. I enjoyed the crowd. I enjoyed the place… I want to enjoy playing tennis, and I didn’t enjoy last two years because after 10 minutes I was sweating too much. I feel the weather conditions are too extreme to practise the sport. I don’t think that’s healthy for the body.”

Of cool, windy Rotterdam, he added: “It is a tournament I know very well. I have been there a couple of times. Is in Europe, is a great event, is a historic event of our tour, I am excited to be back there. I had a great tournament in 2009, I think [he reached the final]. My knees are better. So I am able to play more on hard.”

A timely admission as Nadal attempts a strong hard-court run in Beijing, Shanghai, Basel and Paris. Not that he lacks success in these events: He won Beijing in 2005 and was runner-up to Djokovic last year and in 2013; he is a finalist and two-time semi-finalist in Shanghai; he was edged to the title by Federer last year in Basel; and has a 14-5 record in Paris.

But the Spaniard needs decent points to tie-up qualification for London for the 12th straight year. He currently stands at seventh in the Race, and although Djokovic and Wawrinka are out of Beijing, No2 Andy Murray tops the seeds and, before that, Nadal could face potential qualifier, Lucas Pouille, who beat him in five sets at the US Open, plus No4 in the Race, Milos Raonic.

Nadal is already into the doubles semis in Beijing—honing those net skills again—but if his singles form strengthens while those around him tire, perhaps he could, at long last, be the last man standing in London.

Race to London: the standings

Radwanska and Pliskova confirm places at WTA Finals in Singapore