Rafael Nadal draws line under season: pulls out of Basel, Paris and London 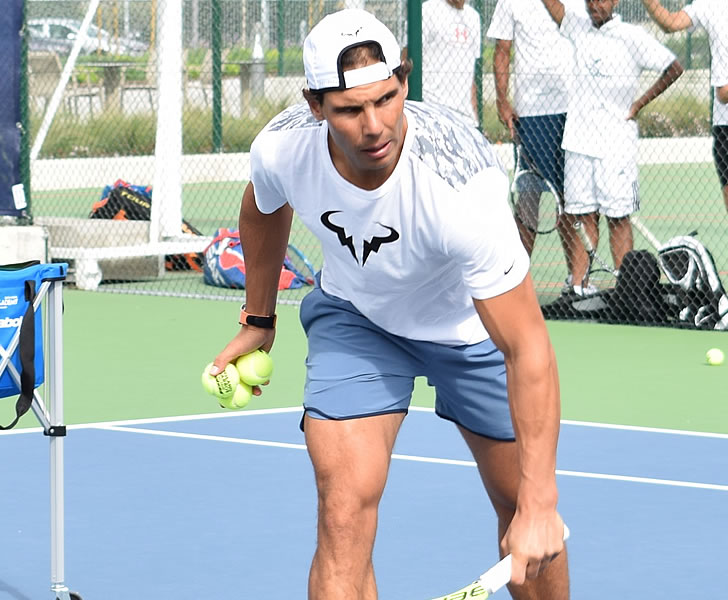 After a day in the full glare of the media spotlight for the inauguration of the Rafa Nadal Academy by Movistar, Rafael Nadal has announced that he will play no further part in the 2016 tennis season.

The reason is down to the injury to his left wrist that the 30-year-old Spaniard sustained during the French Open, where he withdrew from competition after the second round.

He accelerated his return to competition in order to take part in the Rio Olympics, where he won gold with Marc Lopez in doubles but lost in the bronze medal match in singles to Kei Nishikori. It now transpires that, as a result, he suffered a bone oedema due to an overload on a different area from the injury.

A press release issued by his PR company went on: “For this reason he’s taken the decision to put an end to this season and [apply] himself to the specific treatments for a full recovery. The goal now is to completely recover and be able to be pain free in the area and start preparing the 2017 season.”

Nadal added: “It is no secret that I arrived to the Olympic Games short of preparation and not fully recovered, but the goal was to compete and win a medal for Spain. This forced recovery has caused me pain since then, and now I am forced to stop and start preparing the 2017 season.

“I am very saddened for not being able to play next week in Basel since I have a great memory of the tournament and the final played against Roger Federer last year. I won’t be able to compete either in Paris-Bercy, where the crowds and the FFT staff have always treated me so well. Now it is time to rest and start preparing intensively the 2017 season.”

There had been speculation about Nadal’s fitness and confidence after he returned to the main tour following the Olympics. He made early exits in Cincinnati and the US Open and put in an uncharacteristically wayward performance against Grigor Dimitrov in the quarters of Beijing.

The Shanghai Masters already offered up a tough draw—Marin Cilic, Jo-Wilfried Tsonga, and Novak Djokovic among the seeds—but it was a half in which Nadal might have expected to make the semis, as he did last year. It was not to be. For the first time in six meetings, No31 Viktor Troicki beat him, and in straight sets.

Nadal afterwards talked of how difficult he finds the closing months of the season, especially once it moves indoors, as it does from this week through Basel, the Paris Masters, and the World Tour Finals, all of which he was scheduled to play—assuming he qualified for the London finale.

Pressed about qualifying for the World Tour Finals, he revealed some uncertainty about the shape of the rest of the season:

“I don’t know what’s going to happen next couple of weeks: something I need to think about. Cannot say now what I’m going to do during next month. Not sure about my calendar, about the things I need to do to try to be 100 percent ready for next year.

“I need to speak with my team and my uncle, and prepare myself a calendar to work on the things I need to work on. Sometimes keeping on competing is not the solution. Sometimes the solution is practice, and to have a process of training. Maybe that’s an opportunity to do it.”

The season’s London finale, in which only the elite eight men take part, already had a new look following Federer’s announcement after Wimbledon that he would not play for the remainder of the year to rehab a knee injury. He had played the event every year since reaching the semis in 2002, winning it six times.

Nadal has qualified for the World Tour Finals every year since 2005, made the final twice and the semis three times.

Thus the additional withdrawal of Nadal, currently No7 in the Race, opens the door for some new faces in the chasing pack, notably No8 Dominic Thiem, No10 David Goffin, and Roberto Bautista Agut at No13.