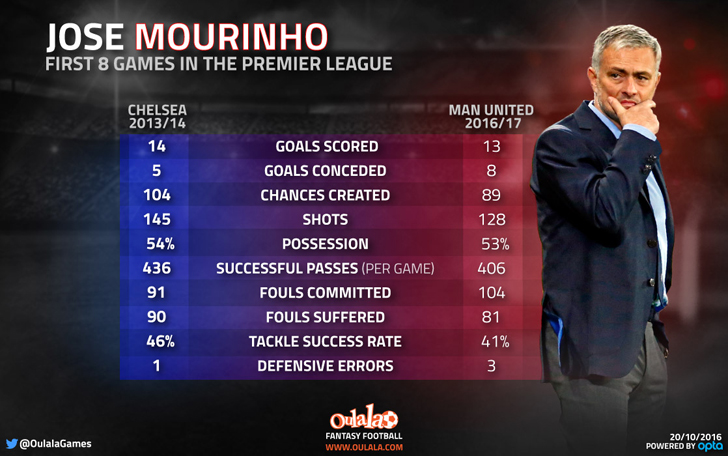 Jose Mourinho will return to Chelsea for the first time since his appointment as Manchester United manager on Sunday afternoon.

The Red Devils named Mourinho as Louis van Gaal’s replacement in the summer after the Dutch coach led the club to a disappointing fifth-place finish in the Premier League last season.

Mourinho won his third English top-flight crown with Chelsea in 2015 but the former Inter Milan and Real Madrid boss was sacked in December after a run of nine Premier League defeats.

Oulala’s stats highlight that Mourinho’s current United crop are failing to match his Chelsea side in a number of key statistical departments, suggesting the Red Devils will fall short of title glory this season.

After eight games, Chelsea had scored 14 times in the 2013-14 season, and although United have found the net 13 times so far, the likes of Juan Mata and Paul Pogba have created significantly less chances – just 89.

This is reflected in their shots on goal. Chelsea registered 145 attempts in their opening eight games in their first season back under Mourinho thanks to the prolific form of Diego Costa and Eden Hazard. United side have only produced 128 shots in the 2016-17 campaign so far.

United have already conceded eight times this season which is three more than Mourinho’s 2013-14 Chelsea crop. It isn’t surprising to learn that the Red Devils have already made three defensive errors this term – too.

In what could be a sign that Michael Carrick is being missed, United have averaged 406 successful passes per game this season with an average of 53 per cent possession.

However, if Mourinho can mastermind a famous win against Chelsea on Sunday on his return to Stamford Bridge then perhaps it would trigger a title push from his United players.