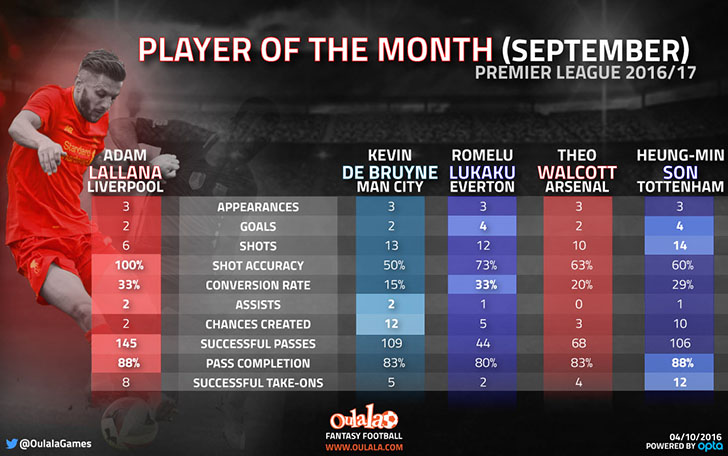 Adam Lallana has been one of the driving forces behind Liverpool’s impressive early-season form under Jurgen Klopp.

The England international has improved his productivity under the charismatic German head coach to help hoist Liverpool up to fourth place in the Premier League table.

Lallana scored two goals in three Premier League appearances in September, which is the same tally as De Bruyne and Walcott. Lukaku and Son both netted four times last month.

Only City’s Belgium midfielder can match Lallana’s two assists during that Premier League run. Lukaku and Son both contributed one assist while Walcott failed to tee up a team-mate.

While Lallana had the lowest number of shots of his four Premier League rivals, the England star finished with the best shot accuracy of 100 per cent.

The Liverpool midfielder has completed a staggering 145 successful passes, which is 36 more than his closest rival De Bruyne. His 88 per cent pass accuracy puts him top of the pile alongside Son.

Finally, Lallana has completed eight successful take-ons which can only be beaten by Tottenham’s South Korea international.

Finishing top of the charts in some key departments, Lallana looks like the obvious candidate to win the Premier League player of the month for September.