Chelsea have been dominant since Antonio Conte switched to a 3-4-3, and these Oulala states highlight why 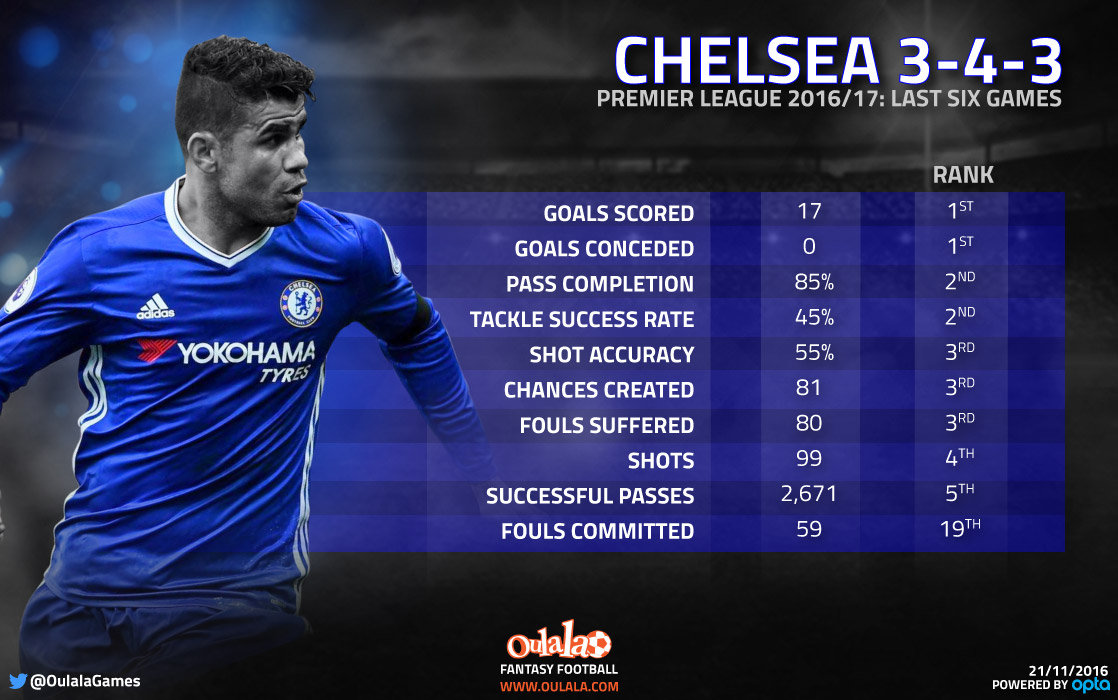 Chelsea hoisted themselves above Liverpool and into top spot in the Premier League table thanks to their 1-0 win against Middlesbrough on Sunday afternoon.

The west London side have emerged as genuine Premier League title contenders since back-to-back defeats by Liverpool and Arsenal, which triggered Antonio Conte to switch to a 3-4-3 formation.

Oulala have highlighted the key numbers behind Chelsea’s resurgence under Conte ahead of the visit of unbeaten Tottenham Hotspur at Stamford Bridge next Saturday.

Chelsea have scored 17 times in their last six Premier League games which is even more than free-flowing Liverpool. This has been in part thanks to Diego Costa and Eden Hazard’s prolific goal-scoring form.

Belgium international Thibaut Courtois has kept more clean sheets than any other Premier League goalkeeper this season – and keeping six successive shutouts is a better defensive record than even Tottenham Hotspur’s back four over the last six games.

Chelsea have made 2,671 successful passes, which ranks them as the fifth-best in the Premier League, while the west London side have completed 85 per cent of their passes – the second best in the English top flight.

Only two Premier League teams have created more chances than Chelsea’s 81, while Conte’s side have registered 99 shots on goal and have averaged 55 per cent shot accuracy.

With Hazard mesmerising Premier League defences, it is no real surprise that Chelsea have suffered 80 fouls, which is the third-most in the league. Overtly, Conte’s side have been staying on the right side of the law with only one top-flight team committing less fouls than Chelsea.

Given their impressive form and Oulala’s incredible stats, can Chelsea become the first Premier League team to beat Tottenham Hotspur this weekend?