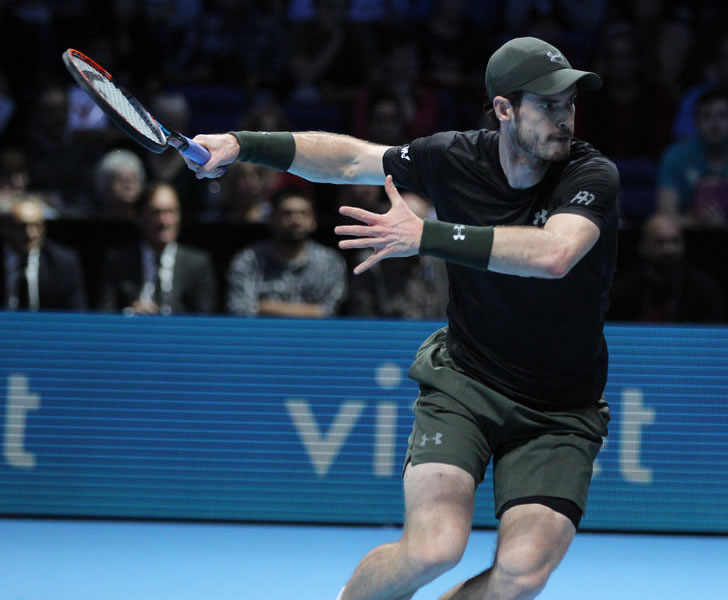 Andy Murray’s straightforward win over one of the form players of the autumn, Marin Cilic, in his first match at this year’s World Tour Finals came and went with plenty of excitement. It was, after all, Murray’s first match on home soil as the world No1.

But it was a landmark match for another reason: It marked his 800th match on the ATP tour. It increased his match-win tally to 74, the most he has achieved in any single year in over a decade as a professional player.

It also took his unbeaten streak to 20, and although he put together a 22-match run from Queen’s through to the final of the Cincinnati Masters, he could still break that run here in London with unbeaten progress to the final.

And should he reach the final, he would also beat last year’s record 85 matches in a single season. That is some achievement considering Murray took the entire month of February out to spend with his wife and newborn daughter.

But memories of his return to court, of a match played in the heat of Davis Cup competition against Japan in the first week of March, would surely come back as 2016 headed to its climax. Back then, Kei Nishikori fought from 5-7, 6-7 down to force a fifth set. Murray eventually won in what became the joint-longest match, 4hrs 55mins, of his career.

And that would be just one of three previous contests between the two men. Murray beat Nishikori with relative ease on his way to Olympic gold, and the man from Japan would take bronze. But come the US Open quarter-finals, Nishikori was the victor in another four-hour thriller, 7-5 in the fifth set.

He has admitted several times since that the win—and reaching the US Open semis—had boosted his confidence in what has become one of his best seasons, including two finals and two further semis at Masters level. Would that big win, and that confidence, prove decisive in their round-robin meeting at the O2?

Nishikori hoped so: “For sure that gives me a little confidence. This year we played three, four times. I had a tough loss in Rio, but US Open and Davis Cup, we played some good matches. I feel [I have] more chance to win the match against Andy.

“Obviously it’s the toughest match maybe in this group. I have to play well and play 100 percent to beat Andy.”

Certainly going into this fourth meeting of the year, there was nothing between them: Both had won their opening rubber for the loss of only five games. So the winner now would as good as guarantee a place in the semis, a stage that Murray had not reached since 2012. And with every match vital in the Briton’s campaign to fend off Novak Djokovic to the year-end No1 ranking, this 801st match of his career was packed with significance.

There were, it is fair to say, high expectations from after two such tight battles this year. And although both men started tentatively, neither hitting freely, it soon became clear that this would be as high-quality a battle as their previous ones.

Nishikori found his touch first, making some clean strikes from all around the court. Murray, rather like Djokovic the night before, took longer to find his range. Indeed he faced a break point and three deuces in the third game, and the same in the fifth.

Eventually, his serve found its groove for a love hold. As they headed to what looked a certain tie-break, Murray again faced break point, and held off Nishikori’s fast and aggressive game for 6-5. He then earned his first break point of the match—a set point.

The mental resilience of Nishikori, though, impressed. Not a tall man, he came to the net and picked off a couple of great smashes before holding with a backhand winner.

The tie-break was more of the same, the set encapsulated in a pulsating to-and-fro that saw Nishikori attack to steal a 6-3 lead. But his three set points evaporated as Murray defended like a demon to pull off a couple of passes.

Another point, and it was Murray who had set point, and he would have two more, but Nishikori was bold in coming to the net, saving the last at 8-9 with two smashes. He went on to fire an amazing forehand winner, and grabbed the set at his fifth attempt, 7-6(9), after a compelling hour and a half.

The mark of a champion, though, is to regroup and refocus, and Murray did so: He broke straight away, opened a 4-2 lead, only for Nishikori to rip a backhand winner on break point to level, 4-4. But despite a superb drop and lob combo from the Japanese man, Murray broke to serve for the set.

Still it was not easy: Nishikori continued to mix it up, threw in some more drops, made a fine volley winner, but could not convert his two break chances. Murray held, 6-4, after 2hrs 6mins.

A full 14 minutes into the final set, and they were still locked at 1-1. But Nishikori was beginning to make more errors, surely feeling the effects of this battle. Two double faults did not help, and despite running Murray into the ground for deuce, the Briton caught a lucky net-cord winner to get the break.

Could the quality remain as high? There were more stunning exchanges in the 10-minute fourth game, Murray fighting for his life. But he fought off two break points with some timely serving, broke again, and held for 5-1. The match was three hours old, and the O2 thundered with excitement. Even they probably did not anticipate a comeback, yet Nishikori threw his last resources at Murray, and broke. Suddenly Murray was having to serve at 5-4 for the match.

His final push was enough, a love hold, at 3hrs 20mins—the longest three-setter ever played at the World Tour Finals and just one minute short of Murray’s longest over three sets.

How did Murray find enough to get over the finishing line?

“That’s what you work for, these moments, big matches, in these places, in an amazing atmosphere… Hopefully I have three days left in the season and I’ll try and get through all of them.”

He is still not guaranteed his place in the semis, though if Marin Cilic beats Stan Wawrinka in Wednesday’s evening match, he will. Another factor, however, is whether he finishes top or second in his group, for if it is the latter, he will face Djokovic in the semis rather than the final.

His fate was in the hands of Cilic and Wawrinka.