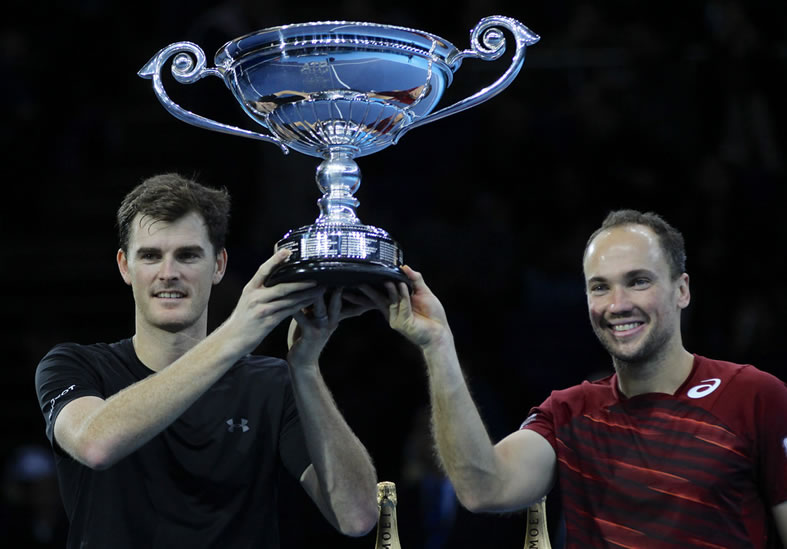 The day after debuting duo Jamie Murray and Bruno Soares were confirmed as the year-end No1 doubles team, and two days after reaching the semi-finals of the World Tour Finals with three round-robin wins, they have been knocked out of the competition.

Another first-year pairing, Raven Klaasen and Rajeev Ram, took just one hour to beat the British/Brazilian pair, 6-1, 6-4. Klaasen, of South Africa, and Ram, from the United States, will play Finland’s Henri Kontinen and Australian John Peers in Sunday’s final.

Defeat for Soares also ends his hopes of claiming the individual No1 ranking for a doubles player. He needed one more win to overtake Nicolas Mahut.

Murray and Soares, who won the Australian and US Open titles this year and reached the finals of the Monte Carlo and Toronto Masters, collected the ATP Year-end No1 trophy on court after their match.

Later, talking to the media, they reflected on the match and on their outstanding first season together.

Murray said: “I think we didn’t do a terrible job today, we just got kind of steamrolled, which can happen in doubles… We probably missed a couple shots at wrong times that didn’t help our cause. [But they] just played a lot better than we did. Fair play to them.”

As for becoming the No1 duo, he admitted it was a huge achievement.

“To win in Australia and the US Open were huge achievements. We both came into the partnership not having won a Grand Slam, both being in finals before. And to get two in the first year is a great achievement. I think we can be really proud of our efforts this year. It’s not easy to make a partnership work, I think. We did a great job, we worked hard for each other, tried to improve ourselves and as a team.

“I think we’ve got lots to look forward to next year.”

Soares went on: “The fact that we lost today doesn’t take anything away from us, everything that we achieved throughout the whole year.

“It’s worse to get an award after you lose a match, but we knew that could happen. But we had an amazing year, a very special year for both of us. We won two Slams. We did a lot of right things.”

They now go their separate ways for a short holiday in the all-too-brief off-season, and will prepare for the defence of their Australia title in Doha, which begins on 1 January 2017.