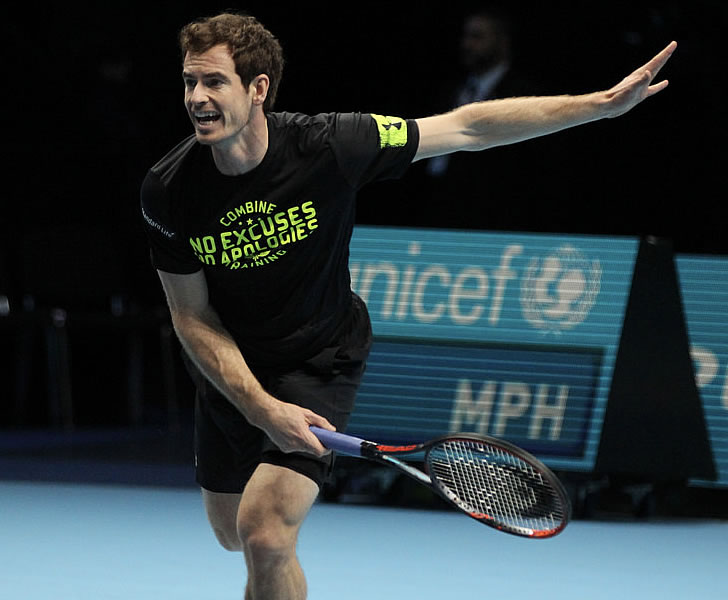 Andy Murray is through to the final at The O2 Photo: Marianne Bevis

There can be no doubting the ambition of the big 25-year-old, Milos Raonic. For while he may have set his sights on a Grand Slam title this year, and fell short by one match at Wimbledon, this has been a year of steady and determined improvement—in his athleticism, fitness, coaching team and more.

He beat Roger Federer at Wimbledon, Stan Wawrinka at the Australia Open, Tomas Berdych on his way to the final at Indian Wells, and pressed Novak Djokovic to two tight tie-breaks here in London in one of the matches of the week.

It all added up to a shot at a career-high No3—something that, in the last decade of dominance by the ‘big four’ of Federer, Djokovic, Rafael Nadal, and Andy Murray, only a small handful has achieved. Berdych, Juan Martin del Potro and, more recently, Kei Nishikori have made No4, but only David Ferrer and Stan Wawrinka have gone higher.

So Raonic looked set to put himself into very select company, and only Nishikori could deny him, and that only by winning the title. Should Raonic beat Murray, nothing could deny the Canadian.

But that was a mountain to climb. Raonic had lost all five matches played against Murray this year—and Murray had his own ranking battle to fight. To keep the top spot, he needed to keep winning, because Djokovic was less than one match-win behind him.

But that did not diminish Raonic’s ambition, and he believed he had a good chance of victory: “I’ve played Andy many times this year. I haven’t gotten the better of him. He’s been playing well. He’s been playing a lot of matches… [But] I think the one thing that I might have is how much he has on his shoulders right now, a lot of consecutive matches, and as well what he’s playing for. I have to do my best to try to accentuate that as much as possible so I can really get the most out of myself and hopefully be able to get on top of him for once this year.”

His appraisal was not wrong. Murray had played and won a lot of matches. His victory over Raonic in their last, the semis of the Cincinnati Masters, was his 22nd straight. This time, Murray would face him already on another 22-match winning streak.

Since May, when he beat Djokovic for the Rome Masters title, the Briton had reached 11 finals from 12 tournaments—and won a tour-leading eight of them. Then there were the hopes and expectations of the home crowd for his first World Tour Finals title and the end-of-year No1.

And there was no getting away from the fact that some of his matches against Raonic this year had been close. Murray looked defeat in face in their five-setter at the Australian Open, and at Queen’s the Briton won his fifth title only after coming back from a set down. Murray had every right to be wary of the pace of the O2’s court this year: “He obviously serves big, goes for his shots, moves forward when he has the chance. I think he probably likes the conditions here: It’s a little bit quicker.

“You don’t normally get loads of opportunities against the big servers. Then it comes down to when you do get those chances, whether you take them or not. And this year when I’ve played him, I’ve created a few opportunities. I’ll need to be [clinical] tomorrow if I want to win.”

Murray was that and more against an aggressive opening from Wawrinka yesterday, producing his finest tennis of the tournament so far. And he began this match in similar style: 10 straight points on serve. But Raonic soon showed just what a powerful and resilient player he has become.

In the fifth game, he fired his first salvo, two return-of-serve winners for break point. Murray survived, but after receiving a time violation in the ninth game, the Briton tightened, and Raonic pounded to three break chances, five deuces: Still Murray was unbreakable.

Then serving at 5-5, two long forehands and a double fault, and Raonic was rewarded with the break. He served it out, as cool as a cucumber, 7-5 in just under an hour.

But this epic contest was just getting started. Murray’s intensity was back and it was Raonic’s turn to dig deep to fend off break points and five deuces. And in the third game, yet another long affair, Raonic got the break.

Now it was the Canadian’s turn to have a spate of errors and Murray broke back to love, held to love, and looked set to open clear water when he slotted two backhand winners for two more break points.

He berated himself for failing to convert, and they edged to 5-5 as the clock hit two hours. Murray managed to hold firm under intense pressure and it headed into a tie-break.

Against the odds of a huge-serving opponent, the supreme returning of Murray combined with some imaginative net points—one a remarkable get off his shoelaces—to carry him first to 4-1, then 5-5, then to two final points for the set, 7-6(5).

After 2hrs 21mins, there was nothing between them—and the final set continued in the same vein: break points survived followed by a love hold for Murray, then two aces to come through deuce for 4-4.

What seemed a breakthrough in the ninth game, as Murray took advantage of three Raonic errors, was immediately lost. Another break apiece and they headed to another tie-break with the arena now at fever pitch.

Murray had survived the longest recorded three-set match in the tournament’s history against Nishikori on Wednesday: 3hrs 20mins. Now he and Raonic upped the ante: 3hrs 38mins. He admitted, though he did not need to say it: “I’m tired. I’ve played so much tennis over the last few months. [But] I’ll give it my best effort—the best of what I have.”

Murray is into his first ever final at the O2, but at what cost, only Sunday afternoon would tell. If Djokovic wins the second semi, Murray will have to beat the Serb in the final match of the week.

He will, judging from this epic contest, give his all: He has never given anything less. But to win this trophy and keep the No1 ranking, nothing less will do.