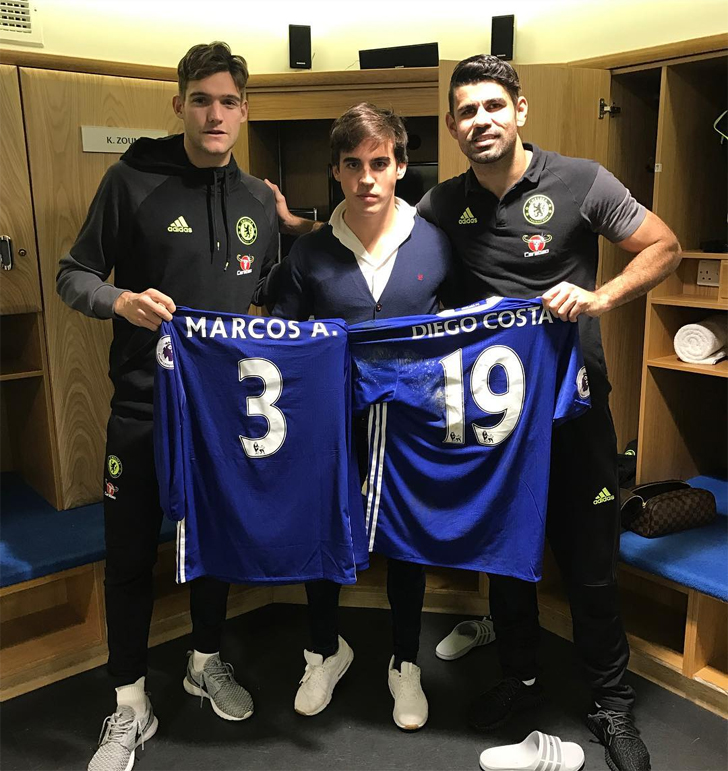 Marcos Alonso and Diego Costa were all smiles with a Spanish matador on Saturday evening after Chelsea laid down a title challenge to their rivals.

The Blues recorded a seventh straight Premier League victory thanks to a 2-1 win against Tottenham Hotspur at Stamford Bridge.

The west London side managed to recover from a 1-0 deficit after Christian Eriksen became the first player to score against Chelsea in the Premier League since Mesut Ozi’s strike in Arsenal’s 3-0 win at The Emirates in September.

Antonio Conte’s side were level before half-time after former Barcelona forward Pedro Rodriguez curled a finish past France and Tottenham number one Hugo Lloris.

And Chelsea completed their comeback in the 51st minute after Victor Moses finished from close range despite the best efforts of Lloris and Jan Vertonghen to keep the ball out on the line.

Alonso and Costa waved the blue flag at Chelsea’s title rivals alongside Spanish matador Gonzalo Caballero in the dressing room after their derby triumph.

The Chelsea signing posted the above photo on his Instagram page and captioned the snap:

“Great win to make it 7!! Good to have my bro in town! @gonzalocaballeroo @diego.costa thanks for your support really help us today!”