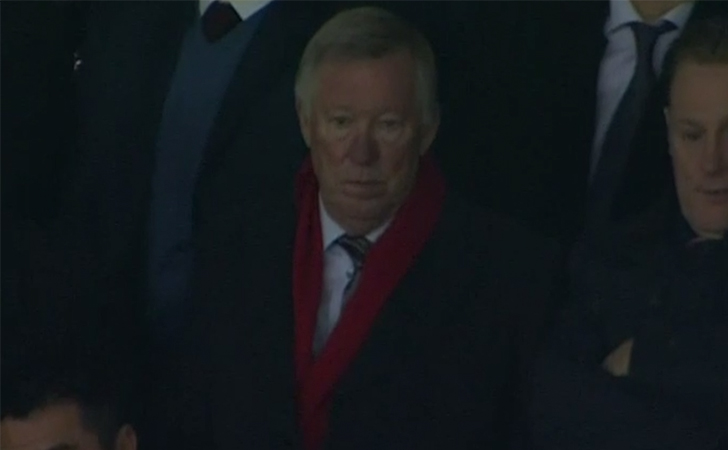 Sir Alex Ferguson didn’t look too impressed as he sat in the stands at Old Trafford on Sunday afternoon after Manchester United lost further ground on their Premier League title rivals following a 1-1 draw with West Ham United.

Hammers forward Diafra Sakho broke the deadlock in the second minute at the Theatre Of Dreams as Jose Mourinho’s side made a poor start to the Premier League clash.

The Senegal international’s goal was the second-fastest that the Red Devils have conceded in Premier League history at Old Trafford.

Mourinho’s summer signing Zlatan Ibrahimovic levelled in the 27th minute after the Sweden international latched onto Paul Pogba’s superb lofted pass and guided a finish past the West Ham goalkeeper.

The Manchester United manager was sent to the stands six minutes later after he expressed his frustration at Pogba’s booking for simulation.

Wayne Rooney and Henrikh Mkhitaryan were brought off the bench in the second half as the 20-time English champions sought out a second goal.

However, Ferguson, who was sat in the stands at Old Trafford for the Premier League clash, looked pretty glum after the Red Devils were denied a late winner after Mourinho’s men slumped to another stalemate at Old Trafford.