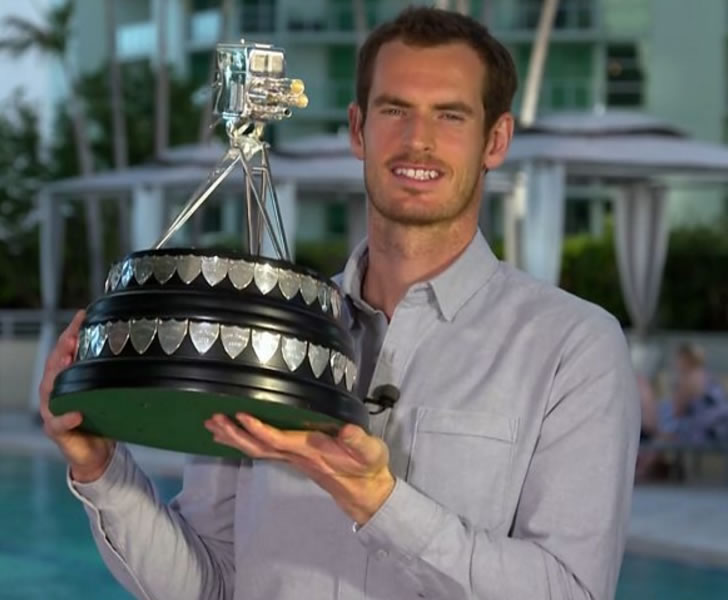 It took a while for the nation to take Andy Murray to its heart, but once they got to know perhaps the best tennis player Great Britain has ever produced, they recognised something special.

This year, Murray played more matches than anyone else and won more, too: 78 from 87. He won more titles, nine of them, from more finals, 13. And those finals included three Grand Slams and five Masters. He not only won his second Wimbledon title but became the first to win a second gold at the Olympics.

Murray enjoyed two 22+ winning streaks during 2016, one beginning with a record fifth Queen’s title and taking in the Wimbledon and Olympic honours, the other still alive at 24 match-wins.

And all nine of his titles came after he hit the clay season in April, since when he reached the final of 12 of the 13 tournaments he entered.

He capped it all by completing what he and many others thought was impossible before arriving in London for the World Tour Finals: taking the No1 ranking that Djokovic had held for two and a half years. And he did all this after taking more than a month off the tour to enjoy the birth of his first child.

Yet aside from all the glitz and the glamour and the celebration, this modest and most unstarry of champions has beavered away at charity fund-raising—including the first of an annual event in his own name during the exhausting days after the US Open and Davis Cup semi-finals—has spoken out on equality, has embodied a remarkable work ethic, and still wears his heart on his sleeve.

These are some of the reasons why, in front of a crowd of 12,000 that included the cream of sport in this Olympic year, he did what no-one has done before in the history of this event: He won for a third time.

But yes, it took a while to win those hearts. It was almost a decade after he won the Young Sports Personality Award in 2004 that Murray won the overall title. Six times he was nominated, and then, amid so many gold medallists in 2012, his singles Olympic gold plus silver in mixed doubles earned him third place.

Come 2013, though, and Murray did pick up the title after claiming his nation’s most famous crown, Wimbledon itself.

After back surgery, he bounced back to end 2015 as world No2, led GB to its first Davis Cup in 80 years, and claimed his second SPOTY prize.

However, the competition this year was perhaps the fiercest he had ever faced after GB put together a storming gold performance at the Rio Olympics and Paralympics.

Among the 16 contenders were 12 other gold medallists. He was up against the likes of Mo Farah, who became only the second man to retain the 5,000m and 10,000m Olympics titles; Nicola Adams, the first British boxer to retain an Olympic crown; Sophie Christiansen who, with cerebral palsy, won three gold medals in dressage in Rio to take her career haul to eight; Kadeena Cox, the first Briton since 1988 to win a medal in two sports at the same Paralympics in athletics and cycling; and multiple gold medallist husband and wife, Jason and Laura Kenny.

Nevertheless, it was Murray who crowned his best ever season with the ringing endorsement of the British public.

Already training in Miami for the 2017 season, he received the award from Lennox Lewis, and once again found time to give his quiet humour an airing: “A huge thanks to my wife and my daughter—she won’t know what this means yet, but maybe in a few years she will. Actually, I’ve got a bone to pick with my wife because about an hour ago she told me she’d voted for Nick Skelton. Not smart from her with Christmas coming up!”

Clearly Kim Murray was not the only person to vote for Skelton. Few who saw the show-jumper’s emotional victory in Rio would begrudge the 58-year-old his moment in the spotlight to receive the third-place trophy. The second-oldest Briton ever to win a gold medal had retired from his sport 16 years ago when he narrowly escaped death after breaking his neck in a fall.

And the second place went to another sentimental favourite, Alastair Brownlee. Not only did he become the first man to retain the Olympic triathlon title in Rio, ahead of brother Jonny in silver place, but he gave up his chance of the World Series title later in the year by carrying his exhausted brother over the line in the last race of the season. The video of his generous act went viral—and rightly boosted his vote this weekend.

But there was no doubting the nation’s favourite. Murray received more votes than those of Brownlee and Skelton combined—a quarter of a million in well under an hour.

Young Sports Personality of the Year: Ellie Robinson, age 15, won gold in the S6 50m butterfly final with an Olympic record at the Rio Paralympics.

Also on the shortlist were rugby union’s Keelan Giles and gymnast Amy Tinkler.

Team and Coach of the Year: Leicester City became one of modern-day football’s greatest underdog success stories as shock winners of the Premier League last season. Their coach, Claudio Ranieri, was named Coach of the Year.

Lifetime Achievement: Michael Phelps, the record-breaking American swimmer, won his 23rd Olympic gold, at the age of 31, in his final Games in Rio.

Helen Rollason Award for outstanding achievement in the face of adversity: Ben Smith ran 401 marathons in 401 days for charity after battling back from injury to pass his fundraising target of £250,000.