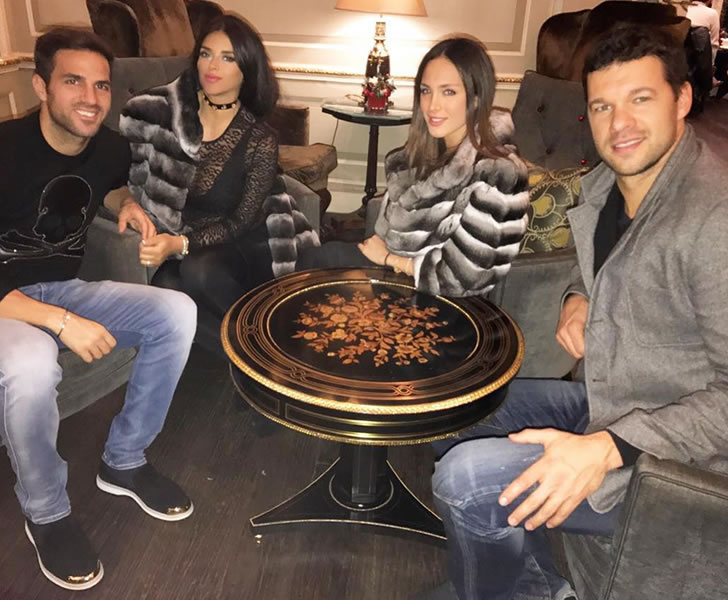 Cesc Fabregas had reason to smile on Saturday night after playing a key role in helping Chelsea secure a thumping 3-1 win over Manchester City in the Premier League.

The Spanish midfielder was restored to the starting line-up by Antonio Conte in the absence of Nemanja Matic and the 29-year-old produced a solid display against Pep Guardiola’s men.

Fabregas set up Diego Costa’s equaliser with a superb lofted pass, before goals from Willian and Eden Hazard in the second half wrapped up a comeback win for the west London club.

The former Arsenal captain will be hoping that his performance on Saturday could go some way towards earning him a regular spot in the Chelsea first team.

And the Spain international seemed to be in high spirits as he enjoyed some time off with Michael Ballack – and his Lebanese girlfriend Natacha Tannous – after the game.

Fabregas was also joined by his partner Daniella Semaan.

Ballack shared the photo above on his personal Instagram account and wrote the caption: “Celebrating the #Chelsea win against #ManCity… Nice to see you back on the pitch @cescf4bregas and great assist, as expected ⚽️ #MCICHE #aboutlastnight 🔵”

Chelsea currently lead the way at the top of the Premier League table after 14 games.

Ian Wright issues warning to Arsenal after 5-1 win: Be more like Chelsea