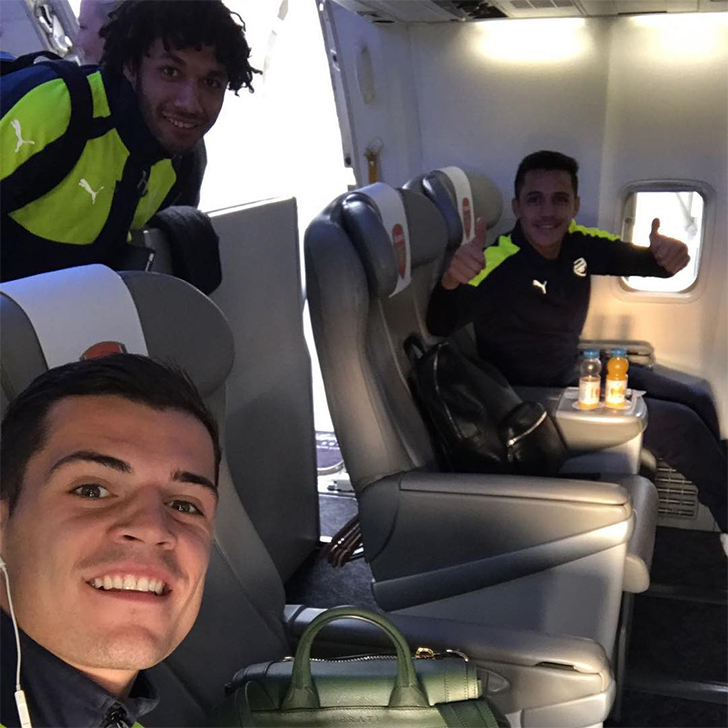 Granit Xhaka was in a pensive mood as the Arsenal midfielder posed for a selfie with Alexis Sanchez ahead of the north London side’s flight to Switzerland on Tuesday evening.

The Gunners are jetting out of the English capital ahead of their final Champions League group game against Swiss holders Basel as Xhaka prepares to line up against his former club at St. Jakob-Park on Tuesday night.

Arsenal are in good form in the Premier League after Sanchez’s second-half hat-trick helped Arsene Wenger’s side ease to a 5-1 victory over West Ham United at the London Stadium on Saturday evening.

The Gunners are unbeaten in five Champions League games this season, although Arsenal must better Paris Saint-Germain’s result against Ludogorets to have any hope of finishing top of Group A.

And Xhaka posted the above selfie on his Instagram page and wrote a heartfelt caption as the Arsenal summer signing relaxed with Sanchez and compatriot Mohamed Elneny ahead of their flight to Switzerland:

“👉Quite an emotional trip for me to Basel, where I had my first steps of my career. @uefachampionsleague @fcbasel
★★★ ⚓#GX29 @Arsenal #IWILL #UnderArmour”

Arsenal have never won the Champions League but finished as runners-up in 2006.