Photo: Eden Hazard all smiles with Chelsea players after 3-1 win at Man City 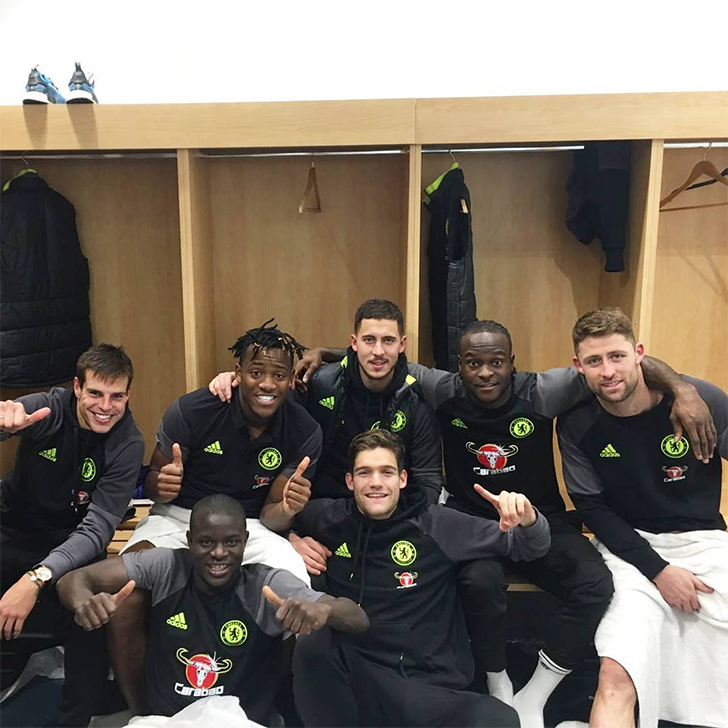 The Chelsea squad celebrate their 3-1 win at Man City

Eden Hazard posed for a dressing room snap with his Chelsea team-mates after their 3-1 win against Manchester City at the Etihad Stadium on Saturday afternoon.

The Blues had to come from behind to secure three points in the day’s early kick-off after Gary Cahill scored a first-half own goal to hand the Citizens a slender lead.

Diego Costa levelled the top of the table clash after the Spain international latched onto Cesc Fabregas’ through ball and placed a finish past City goalkeeper Claudio Bravo.

Brazil international Willian came off the bench to double the visitors’ advantage with a super goal on the break before Hazard finished off another counter-attacking move to seal three points.

Chelsea summer signing Batshuayi posed for an Instagram photo with Hazard and some of his Blues team-mates in the away dressing room at The Etihad.

“We stand for each other! 💪 thats how a team win!! Great game congrats everyone 💙 #NoSurrender #BluesFamily 👊”

Chelsea are four points ahead of second placed Liverpool ahead of the Reds’ trip to Bournemouth in the Premier League on Sunday afternoon.