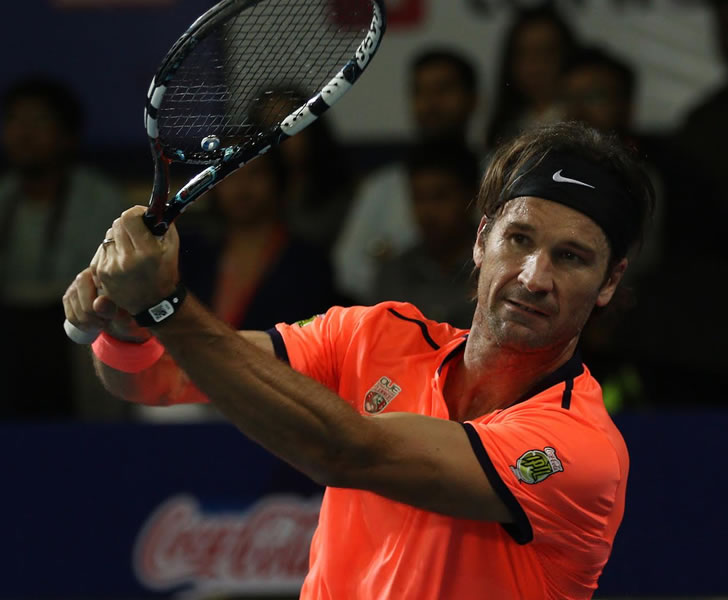 After an exclusive career-long coaching partnership with his uncle, Toni Nadal, 14-time Grand Slam champion Rafael Nadal has announced that he is to add fellow Majorcan Carlos Moya to his team ahead of the 2017 season.

In a press release today, Nadal said: “I am very excited to announce that Carlos Moya will join my team immediately and work together with Toni [Nadal] and Francis Roig.

“To have someone like Carlos who is not only a friend but also a very important person in my career, is something special. He will be next to me in my practice and competition.

“At the same time, he will also join the Rafa Nadal Academy by Movistar, working with Toni and the rest of the technical team.”

Nadal has this week been playing in the doubles of the Spanish Championships at his Academy in Manacor—his first competitive tennis matches since losing in the opening round of the Shanghai Masters. That loss, back in October, concluded a tough season that saw Nadal forced to withdraw from the third round of the French Open with a wrist injury.

He returned to play at the Rio Olympics, winning gold with Marc Lopez in doubles but losing the bronze-medal match to Kei Nishikori in singles.

He went on to win just six more matches in four tournaments, and concluded his season at No9 in the rankings.

There had been some speculation that Nadal would join the trend set by his elite colleagues in appointing a ‘super coach’ to help him regain both the form and fitness that he has been battling to regain for some time. Indeed, since the premature end to his 2014 season with appendix surgery and wrist and back problems, he has won just five titles, among them only one Masters and no Majors.

The 40-year-old Moya retired in 2010, after putting together an outstanding career of 20 singles titles, including the French Open and a period as No1 in the world. He has gone on to be just as successful on the Champions Tour, and earlier this month won all eight of his matches in the IPTL.

Moya ended a year-long coaching partnership with Milos Raonic at the end of November, a season in which the Canadian enjoyed his best season, ending it ranked No3 in the world.

So with the launch of Nadal’s Academy, and his uncle’s involvement in that venture, the time was ripe to seek out the help and support of long-standing friend and occasional doubles partner Moya.

Of the partnership, Moyà explained: “Toni Nadal called me while I was at the IPTL competition. To be honest it was great to receive that call. To be able to help Rafa is something special for me, and I am sure that together with Toni, Francis and the rest of the team, we have a great common project.

“Rafa is a special player and above all a great person and friend in whom I have a lot of trust and confidence that he will be able to continue winning important titles.

“At the same time, the Rafa Nadal Academy by Movistar is an important challenge in an already very professional structure with great professionals that do excellent work.”

Toni Nadal added: “When I knew Carlos had stopped with Raonic, I called him, since we think he can join all our projects including also the Rafa Nadal Academy by Movistar. Carlos has always been a special person for us. Rafael always had great appreciation and consideration when he was playing and as a No1 and he was always there to help us.

“We understand it is the right moment to have him join our team.”

Nadal’s first singles competition is scheduled to be at the Mubadala World Tennis Championships in Abu Dhabi in the opening days of 2017. It is a high-qualify, six-man event that will test the Spaniard’s form against some of the best in the world, including current No1 Andy Murray.

Nadal then heads to Australia to play in Brisbane in preparation for the Australian Open, where he lost in the opening round at the start of 2016.

Andy Murray auctions piece of his historic 2016 season for charity