Roger Federer: Mr Glass Half Full reflects on 2016 but relishes what lies ahead

This year has challenged the Roger Federer fight and feistiness like never before, writes Marianne Bevis 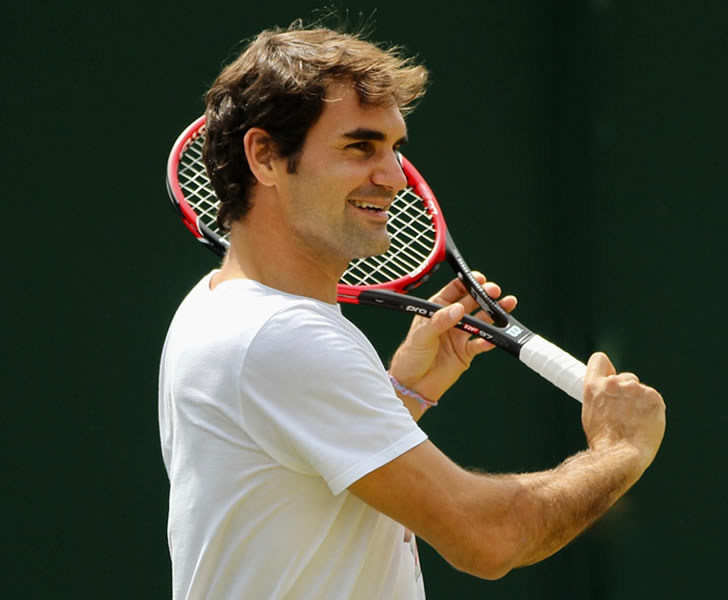 2016 has been a challenging year for Roger Federer Photo: Marianne Bevis

Roger Federer could be forgiven for looking a touch less bright eyed and bushy tailed than usual during 2016.

And contrary to on-court appearances, the famously cool and contained Swiss, who rarely cracks a smile or a tirade while plying his competitive trade, is one of tennis’s extroverts—outgoing, garrulous, expressive, and fun.

Were he a man to put any store in luck or superstition, he might point to astrology, for he is the very personification of Leo. Words such as ambitious, self-assured, generous, loyal, and creative describe those born under the influence of the sun. And confident Leos do enjoy the spotlight.

But Federer is not one for superstition. As former coach Paul Annacone asserted during their partnership: “I can tell you that for Roger and Pete [Sampras], the only superstition they have it that they’re not superstitious… And that’s great because it helps [Roger] stay in the moment.”

Take Federer’s comments to this correspondent during another tricky season—and 2013 was punctuated by back problems and alleviated by just one title: “When you’ve played 1,000 matches, maybe sometimes you’re like—you try hard but it’s OK to lose—and that’s not the mind-set to have. You always want to have the fire to come through at the end, you know?

“So you sometimes get a bit—comfortable. I have really tried to fight it, to make sure I have enough fire going, and that motivation is not the issue—that’s why you need to keep practices exciting, your daily routines you have to have fun, otherwise it becomes a bit of a drain. And that’s where I always changed it up.”

In 2014, he bounced back using his own mantra: He changed rackets, he appointed his idol, Stefan Edberg, as coach, he won 11 titles from 23 finals in the next two years, and was close to reclaiming the No1 ranking along the way.

2016, however, has challenged the Federer fight and feistiness like never before. He went under the knife for the first time in his life to repair a knee injury after the Australian Open, and did not return to court until Monte Carlo.

With a further two tournaments and five matches played, his knee and referred back problems forced him to pull out of the French Open, his first missed Major in a run of 65.

He returned for the grass season, clearly rusty, but at Wimbledon, Federer’s will-to-win helped him survive the sternest of five-set tests from Marin Cilic and fall just short of the same in the semis against Milos Raonic. But a tumble onto the very knee that continued to trouble him—and he was still unable to fully flex the left knee during his service motion—spelled a change of plan.

A fortnight later, he opted out of the rest of the season, including the Rio Olympics, to get his body back to its pre-surgery shape. It was a brave move as he headed to his 35th birthday, but one that put the optimistic side of Federer centre stage.

At the World Tour Finals, late in 2013, the same optimism had come to the fore: “I always see the glass half full. I’m a very positive thinker. Every time it was important to understand why I had the results I had and why I am feeling the way I’m feeling. The moment you get a grip on that, it’s OK, it’s something I have no problem to accept.

“It’s important to be able to move on, have a plan… as you move along, you gain more information, and maybe new insights you didn’t know before.”

In Monte Carlo this year, that positive side was again on show: “In the beginning it was extremely interesting to see how things developed… When you don’t have your crutches, you start running. You think it’s wonderful. Then you can jump. Then you can jump higher. Then you can move more quickly, you can sprint. Every time I was able to do something for the first time, I saw I was improving, and it made me more confident. I loved that part of rehabilitation.”

This time around, Federer enjoyed the luxury of taking control again, taking the opportunity to refresh mind as well as body. He went hiking in the Swiss mountains with his family, jetted to New York ahead of the US Open for several sponsor events, sat front row at fashion week in Paris, and went on to win GQ’s “Most stylish man” accolade.

He helped launch his brainchild, the Laver Cup, in the company of his hero, Rod Laver, along with Bjorn Borg, John McEnroe and Rafael Nadal. Now that is pulling power. 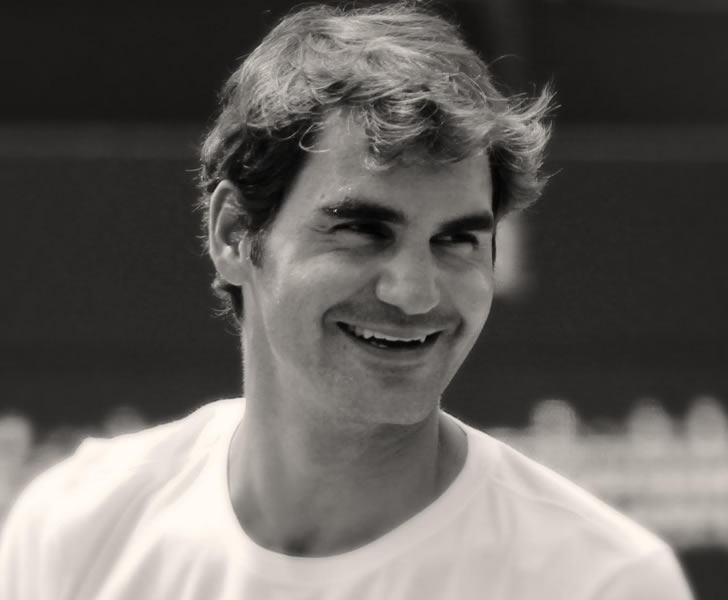 He went to Majorca to help friend Nadal launch the Spaniard’s academy, and then donned a kilt and tried out bagpipes to announce Andy Murray’s participation in Federer’s third Match for Africa.

In another direction, he helped design a new clothing line with Nike, and launched a stylish new version of his racket with Wilson.

Meanwhile he was training just an hour or so a day for the first couple of months, did not play points until October, and only upped the intensity a month ago ahead of his usual training at his base in Dubai.

Fortunately for his fans, his enthusiasm is shared by those closest to him, since he has admitted he would walk away from the tour if wife Mirka and his four children called time. And no-one would blame him with a 36th birthday on the horizon, 1,080 matches and 88 titles in the bank, and more weeks at No1, 302, than any other man.

As it is, the Federer unit seems to run on the premise of “if you’re happy, I’m happy”. He told Christopher Clarey in the New York Times just this week:

“Mirka is totally committed, totally happy. The kids love it and I’m still hungry, and now I’m even refreshed and rejuvenated.”

And if proof was needed, it came in yesterday’s hour and a half Periscope broadcast ahead of his flight to Australia to play the Hopman Cup for the first time in 14 years.

He drove himself to practice in his Mercedes—yes, Leos like their luxuries, and Federer’s endorsements also include Moet and Chandon, Rolex and Lindt.

He chatted and giggled his way through some nimble warm-ups with fitness coach of 22 years’ standing, Pierre Paganini: “We speak French together—that’s the language I learned when I first met him. It’s a habit, because he also speaks perfect Swiss German!”

During practice points, he switched from joker to game-face as easily as he slips between three languages: Now teasing Lukas Pouille over line-calling, body serves and ‘accidental’ ball-on-body strikes, now talking to himself about serving tactics. He paused on game point, focused to ensure a good first delivery, and fired down an ace.

After 10 press-ups for losing a closing volley challenge—and with grin still intact—it was quick-fire answers to the tens of thousands tuned in to Periscope.

What of that GQ award? A guffaw: “Bit more pressure now, what to wear!” Though he admitted that his memorable all-black outfit in New York was his favourite.

Asked about improving his backhand—one of the most admired single-handed shots in tennis—he replied: “Yes, I’ll try to fix my backhand: I’ve been trying to fix that thing for 25 years!”

He has not skied since 2008, but rode a camel last week. He loves piano and flute music but has never watched Star Wars: “Don’t hate me!”

There was an extended running joke about his weak arms: “Would I beat Rafa in an arm wrestling contest? Are you kidding me? No I wouldn’t beat Novak either. Don’t think I’d beat anyone in arm wrestling. If I’m good at anything, it’s rock, paper, scissors!”

He talked of his passion for homeland Switzerland, his admiration for Juan Martin del Potro’s comeback in 2016, and his friendship with Edberg: “What a great two years we had together. He remains the best for me. Gave me a lot of insights, just a lot of fun. So inspiring and motivating to be around.”

Then one cheeky questioner asked: “Why do you smile all the time?” Cue one contorted ‘serious’ face.

But anyone who did dip into the broadcast would indeed have seen smiles. And who can blame him? He does, after all, seem to live a gilded life, on and off court.

But he commands respect and affection not just for his achievements on court, nor for the style with which he plays—though they are the rock upon which his popularity is built.

It is also the joie de vivre with which he goes about his business away from the court, his interaction with fans and colleagues—and one more selfie-seeker. It is in his long years as chairman of the Players Council, in his willingness to play Kids Days and charity fund-raisers—and, yes, pose for yet another selfie.

And if his career ended tomorrow, one suspects, he would still be a very happy man, simply ready for the next challenge.

Ana Ivanovic explains her decision to retire from professional tennis