Johan Djourou has leaped to the defence of Granit Xhaka after one Arsenal supporter urged the ex-Gunners defender to ask the summer signing to leave The Emirates.

The Switzerland midfielder has been heavily criticised after his sending off during Arsenal’s 2-1 win against Burnley in north London on Sunday afternoon.

Xhaka earned his second red card of his Arsenal career for a two-footed lunge on Burnley midfielder Steven Defour in the second half at the Emirates Stadium.

The summer signing was dismissed during Arsenal’s 3-2 win against Swansea City earlier this season, although the 24-year-old has only picked up two yellow cards in the current campaign.

Arsene Wenger signed Xhaka in a £33m deal from Bundesliga outfit Borussia Monchengladbach in the summer, making the defensive midfielder one of the club’s most-expensive signings in their long history.

Djourou showed his support for Xhaka when the Arsenal star posted the above photo on his Instagram page on Monday afternoon.

When one disgruntled Arsenal fan asked the ex-Arsenal defender to tell his Switzerland team-mate to leave the north London club, Djourou leaped to the defence of his compatriot.

Djourou wrote: “@omarkharobi1 Why should I do that ? He got a red card again yeah ok! We won at the end that’s most important ! And let me tell You granit gives everything for the Arsenal shirt !and that’s is style of play so don’t be to hard on him! He plays with passion . He will learn!!” 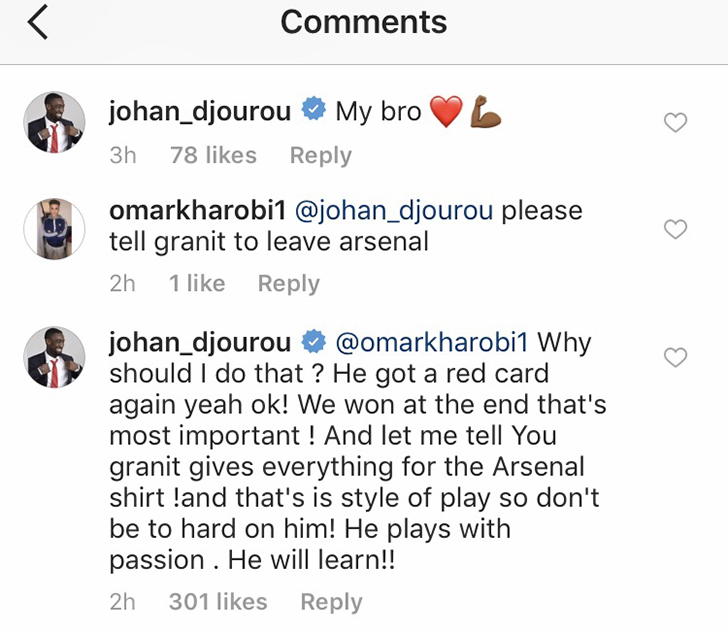 Jurgen Klopp: What Liverpool have to do after difficult moments

Thierry Henry: Training with this current Arsenal star at London Colney was unreal