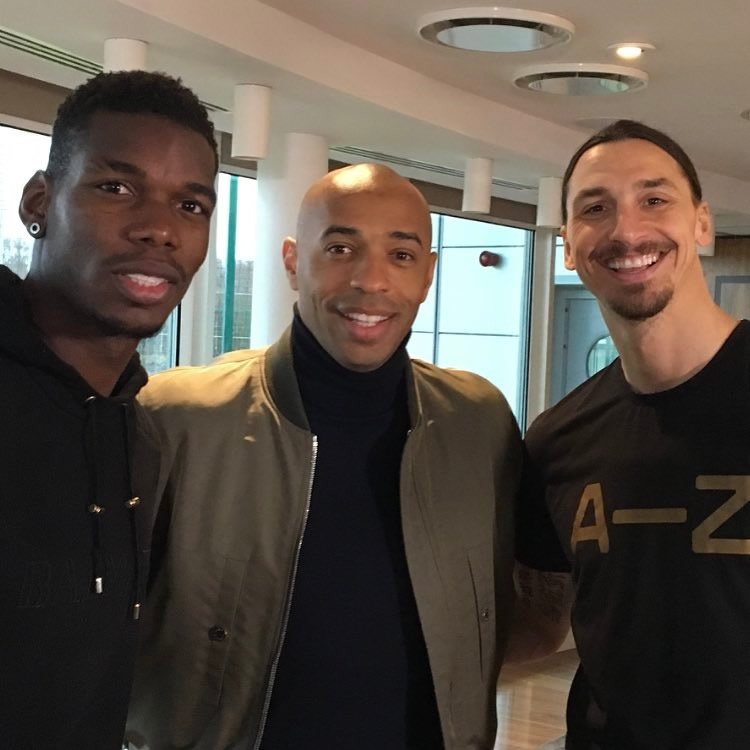 Thierry Henry posed for a picture with Paul Pogba and Zlatan Ibrahimovic at Manchester United’s training ground on Thursday after interview the Red Devils’ pair for Sky Sports.

The Manchester United stars chatted to Arsenal legend Henry after training on Thursday morning as they continued their preparations for the Red Devils’ showdown with Liverpool at Old Trafford on Sunday afternoon.

Pogba and Ibrahimovic have both made bright starts to their careers at Manchester United after joining the Red Devils over the summer.

The Frenchman initially struggled to find his feet during his second spell back at the club but has earned praise for his performances in recent weeks.

And Ibrahimovic has also been in top form for Manchester United following his summer switch on a free transfer – despite being in the latter stages of his career.

And the pair looked thrilled to have caught up with Henry ahead of Sunday’s crunch clash at Old Trafford.

Henry shared the photo above on his personal Instagram account and wrote the caption: “Great catching up with @iamzlatanibrahimovic and @paulpogba See my exclusive interview from 7am tomorrow @skysportsnews_hq and all @skysports platforms #MNUvLIV”

Jurgen Klopp: Why this Liverpool player’s performance didn’t surprise me