N'Golo Kante has made an impressive start to his Chelsea career but how do his stats compare to Claude Makelele? 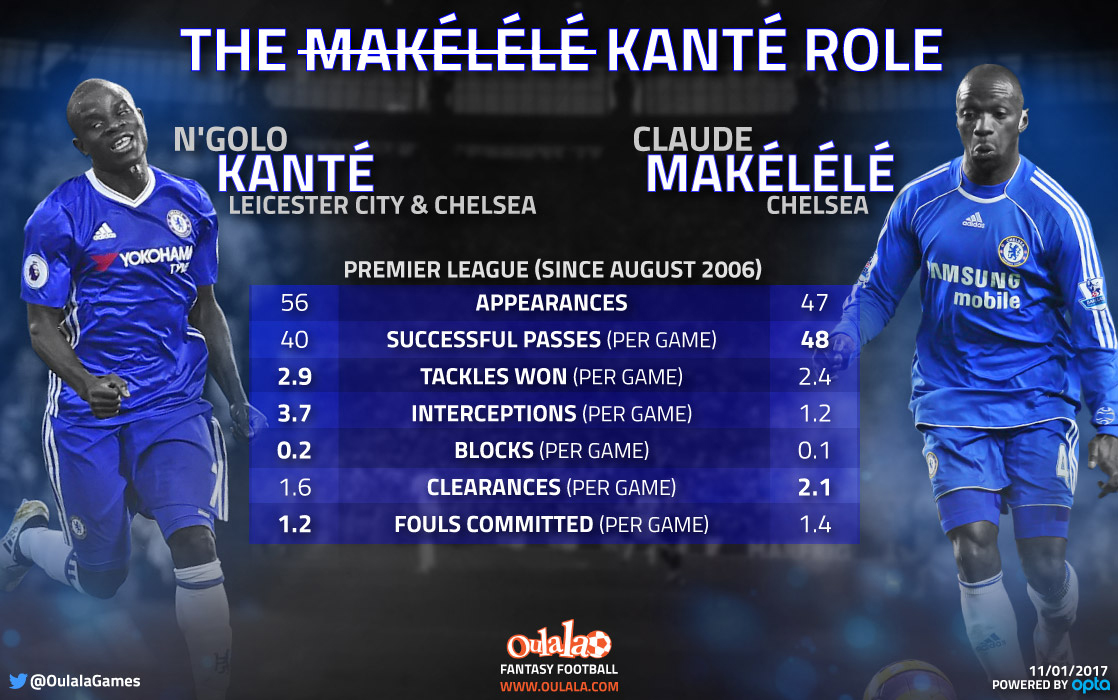 How does N'Golo match up against Claude Makelele Photo: Oulala

N’Golo Kante has made an impressive start to his Chelsea career, but how do the Chelsea midfielder’s stats compare to Blues legend Claude Makelele?

Oulala have examined six key areas to analyse whether Kante has reached the Makelele’s level taking into account the defensive midfielder’s stats in his final two seasons at Stamford Bridge.

Incorporating Kante’s one season at Leicester City, the France international has made 56 Premier League appearances in comparison to the 47 games that Makelele played between 2006 and 2008.

The former Real Madrid midfielder has the advantage in terms of successful passes, with an average of 48 per game.

The £34m summer signing has notched up 2.9 tackles per game in his Premier League career so far, while Makelele could only muster 2.4 per game.

Kante has a far superior record when it comes to interceptions, making 3.7 per game in comparison to Makelele’s average of 1.2.

It’s another win for the current Chelsea star when Oulala examine blocks per game, beating Makelele 0.2 to 0.1.

While Makelele has made more clearances with an average of 2.1 per game, Kante has a better disciplinary record after committing just 1.2 fouls per game.

The retired France midfielder won two Premier League titles, two League Cups and the FA Cup during his Blues career, so Kante has work to do to emulate Makelele in the silverware department but otherwise looks like a worthy successor to his compatriot.

Photo: Nathan Ake all smiles in training at Cobham after Chelsea return