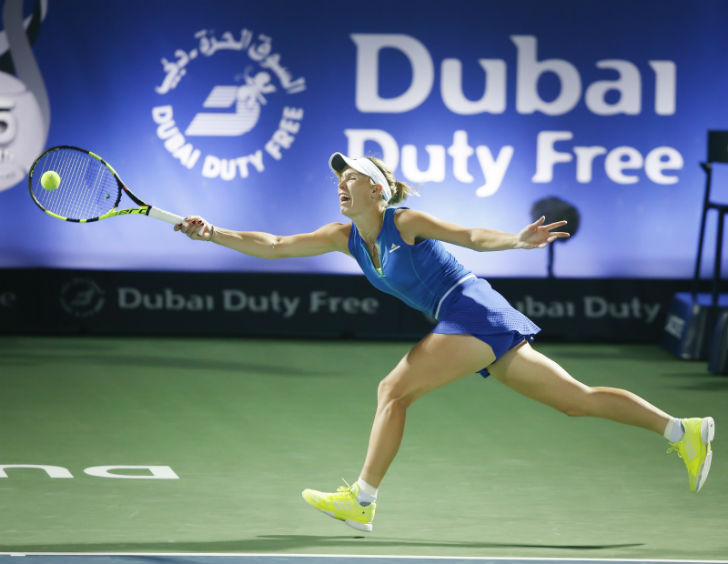 With the 56 women in the prestigious Premier 5 in Dubai this week reduced to the final eight, just three of the original 16 seeds and only one former champion remain.

Top seed, Angelique Kerber, is still on course to reclaim the No1 ranking from Serena Williams—though she needs to win the Dubai title to do so. In a replay of the Olympic final, Kerber met Monica Puig, and this time it was Kerber who came out on top, 6-2, 6-3.

She said of her second straight-sets win:

“I was feeling good from the first point. It’s always tough to play against Monica, especially after our last match. I’m really happy about how I played today. I think I was really trying to stay focused on every single point and trying to move good… just thinking about my game, about my rhythm, and not thinking too much about my opponent tonight.”

She next plays the 36-ranked teenager Ana Konjuh, who has already beaten two seeds, No12 Sam Stosur and No8 Elena Vesnina, and although Kerber beat the Croat in their only previous meeting, that was almost two years ago.

Dubai debutant Lauren Davis, ranked 46, reached the quarter-finals after beating Ekaterina Makarova, 4-6, 6-1, 6-3, her third consecutive three-set comeback. Davis, who won her first title at the start of the year in Auckland, reached the quarters in Doha last week and is likely to break the top 40 for the first time next week. She next faces one of the three remaining seeds, No7 seed, Elina Svitolina, who beat Christina McHale, 4-6, 6-4, 6-3.

In the bottom half of the draw, Kristina Mladenovic failed to build upon her Tuesday upset of second seed Karolina Pliskova: She was defeated 6-1, 6-4 by Qiang Wang, who now plays Anastasija Sevastova.

Another teenager, 17-year-old Catherine Bellis, caused perhaps the biggest upset of the third round against former champion and No4 seed Agnieszka Radwanska, 6-4, 2-6, 6-2.

The young American enjoyed a surge up the rankings at the end of last season, building on a third-round run at the US Open via qualifying to win two ITF tournaments in Canada followed by the Honolulu title in November.

This, though, was her biggest scalp thus far, and she was understandably thrilled.

“Whew, amazing. It’s one of the best feelings in my life, for sure. I’m really happy about the outcome tonight. I was a little bit surprised—I mean, she’s such an amazing player.

“It was probably not her best day, I think in the second set she started playing a little bit better and I went off a little bit. I think I was going for a little bit too much. I just told myself to stay calm and go back to my game, and what I was doing in the first set. I told myself to really be as solid as possible, and then when I had a short ball to take advantage of it right away.”

Bellis now takes on the only remaining former champion in the draw, Caroline Wozniacki, though the Dane struggled to overcome Kateryna Bondarenko, 3-6, 6-2, 6-3.

Wozniacki, who played a cramped schedule in a rain-afflicted Doha immediately before Dubai, losing in the final to Pliskova, needed a medical time-out against Bondarenko to tape her left thigh. She afterwards told the WTA.com:

“I hope today was my day of crisis and tomorrow is going to be better.

“I started to feel the groin just a little bit. You know, I have played a lot of matches, and I think I just strained it a little bit… I’m just thinking I’m playing really well, so I have a lot of confidence, and I just tell myself to keep going, push through this, try and win this tournament. Then I can enjoy a little bit of rest after.”