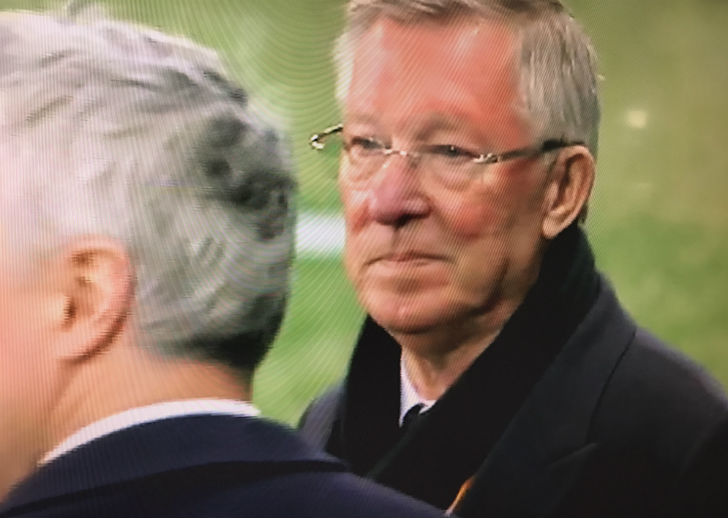 Sir Alex Ferguson appeared to be pleased with Manchester United’s progress in the Europa League after Wednesday evening’s 1-0 win at Saint-Etienne.

The Red Devils made the trip to France in a commanding position after a 3-0 win in the first leg courtesy of Zlatan Ibrahimovic’s hat-trick at Old Trafford.

However, it was another of Jose Mourinho’s summer signings who made the difference in the return leg after Henrikh Mkhitaryan scored a first-half winner.

The Armenia international managed to get on the end of Juan Mata’s low cross to poke a finish into the Saint-Etienne net in the 16th minute.

Midfielders Mkhitaryan and Michael Carrick were forced off in the second leg with injury problems, while Eric Bailly received a red card after half-time.

Ferguson made the trip to France to watch Manchester United ease to a 4-0 aggregate win against the Ligue 1 side on Wednesday evening.

And the Red Devils legend was spotted on the touchline in the above photo after the 1-0 victory alongside the club’s former chief executive David Gill.

Manchester United haven’t won a European trophy since Ferguson led the Red Devils to Champions League glory in Moscow in 2008.