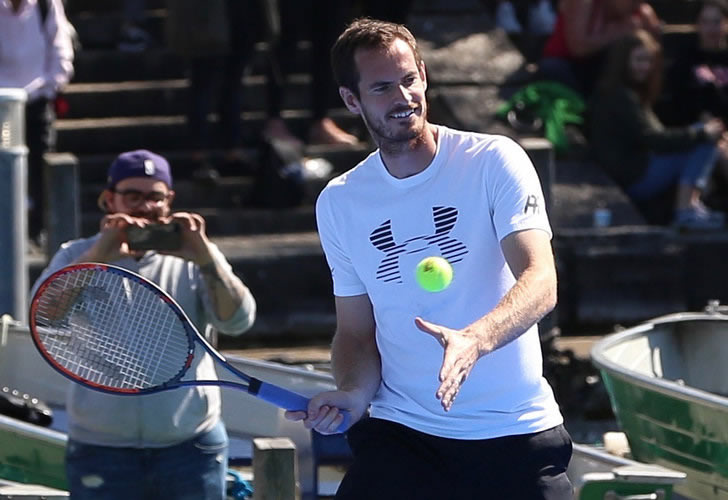 There were, of course, bagpipes. And there was, of course, an introductory nod to the world No1’s knighthood: “Sir Andy Murray”.

The Briton had taken up the challenge of a man who had not always been as generous to him as was the Zurich crowd that cheered Murray’s arrival on court for an exhibition match in aid of the Roger Federer Foundation.

Despite Murray’s early stack of wins over the then No1 Federer—six out of their first eight matches, plus later the memorable victory on Wimbledon’s lawns to win Olympic gold in 2012—Federer had often won the big ones.

Few will forget Murray reduced to tears after losing the Wimbledon final to the Swiss just a month before claiming Olympic gold, nor the trouncing he suffered at the World Tour Finals—London again—in 2014. Indeed, Murray has yet to beat Federer at the O2 in four attempts. And as the MC for the Match for Africa 3 mischievously pointed out, Federer had won their last five meetings, too.

However, Murray has one thing that Federer will never have: that knighthood. Though as the Briton wryly pointed out, “Roger does quite a few things better than me… well most things, actually!”

And hereabouts, Federer is as close to royalty as Switzerland gets. As one wag shouted out during their entertaining and energetic match, “Federer for President!”

Much as this was about fund-raising, though—and Federer will return the compliment for Murray in Glasgow in November, also in aid of children’s charities—there were a few serious questions to be addressed in Zurich.

Federer’s resurgence after his long absence in 2016 had made headlines at every turn. With the Australian Open, and the Indian Wells and Miami Masters already in the bag, could he, the same MC asked, make No1 by the end of the year, thereby becoming the oldest man to do so?

Federer prevaricated: He was not keen on the ‘oldest’ element of the question, but went on to admit that it was nice even to ‘be in the conversation’.

However, it was all the more of a valid question because Murray missed Miami with an elbow injury, just as Novak Djokovic did. And it transpired that the Briton had been very close to pulling out of Zurich.

“Me and Roger spoke the day after the Miami final, chatted again on Wednesday, and I told him my gut feeling was I wasn’t going to be able to do it, because I’d hardly started serving yet and my elbow was sore when serving at about 60mph. But each day it got a little better, and on Friday I had a practice in Nice and tried to serve like tonight, which is way better than a few days before, and that was good enough for me to come and play properly.”

Play properly he did, and the two produced some wonderful rallies packed with lobs, net attacks, SABRs and tweeners, plus some stunning defence by Murray against the aggressive Federer. It was crowd-pleasing stuff, but also body-testing stuff.

So, the first question had to be, how had Murray’s elbow stood up to its first real test?

“It’s obviously good for me to play and see how it feels. In practice, when it’s controlled, you always tend to feel a little bit better. It’s when you play matches you get an idea. I was serving at about 80-85 percent speed, and it feels OK just now. I just need to keep progressing like that—I’ll see how it feels when I get up.”

He has already been training on the clay of Nice, just along the coast from the opening Masters of the clay season in Monte-Carlo. It was on clay last year where he began the extraordinary run that took him to the No1 ranking: the semis in Monte-Carlo, the finals in Madrid and the French Open, and the title in Rome.

Beyond that, he was unbeaten on grass, grabbed another Olympic gold, and went unbeaten through Asia and the indoor conclusion to the year: a 78-9 record and nine titles.

But such is the ruthless structure of tennis and its rankings that Murray now has to defend those same huge points to keep one step ahead of the chasing pack—among them, of course, Federer. And that means he needs to be in prime shape, so he clearly has no intention of rushing things.

“The plans are trying to get ready for Monte-Carlo, that’s the goal. I’ll practise [in Nice] for the next three or four days, and try and increase the serving. The elbow is a lot better than it was a week ago, but to play a tournament right now would be tough. To do well, you have to be able to play five days in a row, and to be serving a little bit faster and harder than tonight. I’ll just have to see. I’m not sure whether I’ll be ready for Monte-Carlo or not.”

His elbow injury also removed him from the British Davis Cup squad for its quarter-final tie against France last weekend. But the absence of many other top players straight after the demanding hard-court swing through Australia and North America raised once again the demands of the tournament. Indeed the International Tennis Federation has just proposed some significant changes.

Murray’s dedication to Davis Cup is irrefutable: His string of wins, in both singles and doubles, through the years that took GB from Zone Group 2 to World Group to the title in the space of four years, leaves little doubt about his commitment. But, rather like Federer, Rafael Nadal and Stan Wawrinka have done since winning the title, he is faced with tough choices about his tennis priorities.

He was, as always, articulate about the problem.

“I think [shortening to best of three sets] can help. But it’s difficult, [as] I know from playing in Slams, and going deep in Slams for a long time, then the following weekend having to play three matches over five sets…

“I haven’t heard any player say they hate the Davis cup, playing for their country, everyone loves it, but it’s also a stressful weekend. Like last year, after the US Open where I lost to Kei [Nishikori] in five sets [in the quarter-finals], we then played Argentina, and I had a five-set brutal match against del Potro just a few days later… when, if your team had their way, they’d go ‘now is the time to rest, at the end of Olympics, Cincinnati, and the US Open.’

“So the scheduling is tricky as well. Shortening matches could help for sure. We need to find out what the ITF are going to come up with.”

However, it seemed only right, after Murray’s generosity to Federer’s Foundation, to find out his own plans on the charity front. Federer is cranking up his fund-raising activity, Nadal has launched a tennis academy, but Murray has gone down a different path by supporting a variety of causes, Unicef key among them.

“I don’t know. I would like to travel a bit more to some of the places that have been worst affected. But when we’re playing, the season is so long and you never know… with an injury you might have to miss some time and [reschedule my events]. Now doing these events is fantastic, but actually visiting the place where the money’s going and seeing it for yourself is a huge eye opener.”

It sounds as though he has been talking to Federer, who also stressed how keen he is to visit again his African projects as soon as his own children are old enough. But those plans, like Murray’s, may have to go on ice a little longer than the Swiss anticipated. There is, after all, that No1 ranking to consider.