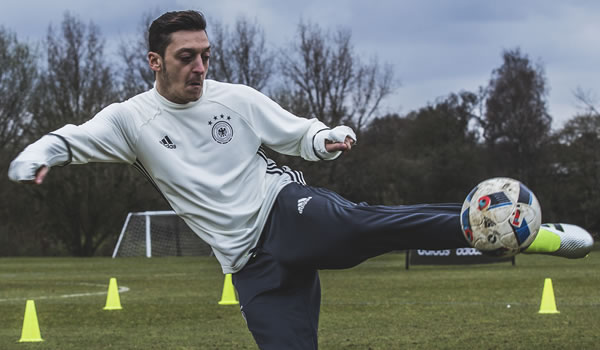 Arsene Wenger has heaped praise on Mesut Ozil following his sparkling performance for Arsenal in Wednesday’s 3-0 win over West Ham.

Ozil was named man of the match as he scored the opening goal in the second half and also assisted another to help the Gunners get their top-four bid back on track.

It was Ozil’s first goal for Arsenal since mid-December and contributed to a win which helped lift the Gunners up into fifth place in the Premier League table.

There has been plenty of speculation about the German’s future at Arsenal beyond the summer transfer window, with his current deal set to expire at the end of next season.

However, Wenger was gushing with praise for Ozil after his inspired display in the Gunners’ 3-0 victory on Wednesday night.

“I love Mesut Ozil and I love his game as well.

“I think he suffered when we went out of the Champions League and he was really down for a while. Now he is refocused and you see a different player.”

He continued: “For a while we had not had that feeling [of winning]. As well, with 10 minutes to go the game was nearly done so we can relax a little bit.

“There has been huge pressure on the players in recent weeks and I’m happy that they can come back and focus and enjoy their game. You could see in the second half, the players enjoyed to play and that goes through the team.

“It comes out from the team and the fans feel that as well.

“You have to just keep your focus and win the games. The Premier League is so difficult now that if you win, you always get one or two good results for you.”

Ozil will be hoping to feature for Arsenal when the Gunners return to Premier League action next Monday with a trip to Crystal Palace.