Chelsea star: This is why I love Eden Hazard 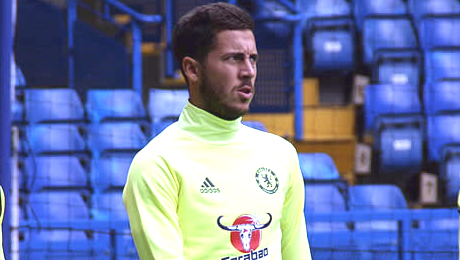 Diego Costa has heaped praise on Eden Hazard following his sparkling form for Chelsea this season.

The Belgian playmaker has been in superb form for the west London club after struggling to produce consistent performances for the Blues last season.

Hazard’s top displays for Chelsea this season has helped the Blues establish themselves as the firm favourites to win the Premier League this term.

The west London side are currently leading the way at the top of the Premier League table as they look to win the title in Antonio Conte’s first season in charge at the club.

And Chelsea striker Costa has been hugely impressed by what he has seen from Hazard at Chelsea this season.

Speaking to Chelsea’s website, Costa said: “Playing with him is something beautiful.

“You are playing on the field and enjoying at the same time what he does during the minutes he is on the field, because he is a top player.

“At every moment I know more or less when he is going to pass the ball on to me and I also sort of know when he’s going to ask me for the ball to complete the move.”

Hazard has been showing the kind of form which won him the PFA player of the year award in 2014-15 as Chelsea won the Premier League and League Cup under Jose Mourinho.