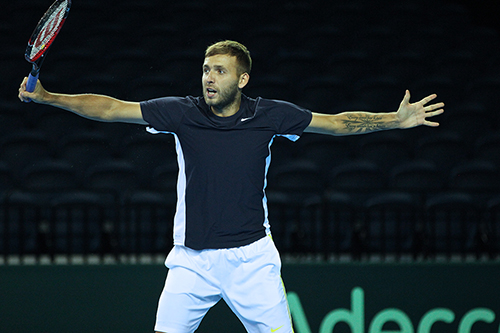 Great Britain’s Kyle Edmund knew he had a tough task against the highest ranked man in the quarter-final tie between his nation and France.

Lucas Pouille has made huge strides up the ranks to No17, and although he is still only the third Frenchman in the top 20, and playing only his second live rubber for France, he has shown talent across all surfaces.

Last year, in his big breakthrough, Pouille made the quarters of Wimbledon and the US Open back to back, having already made the semis at the Rome Masters.

That ranked the Frenchman 30 places higher than Edmund, though the Briton had scored clay wins in Davis Cup against Serbia at this stage last year.

And in 2017, the Briton came up just short of beating No3 Stan Wawrinka in Brisbane’s quarter-finals, and did the same against Milos Raonic in the quarters in Delray Beach. His only win since, though, came in the first round of Indian Wells, where he went on to take Novak Djokovic to a second-set tie-break.

Edmund made a close fight of it in the early stages of the opening rubber, though, as they exchanged breaks, but Pouille got the key break in the 11th and served out the set, 7-5.

The second set looked as though it would go to Edmund. The Frenchman took an immediate 2-0 lead, but Edmund levelled, and they headed to tie-break, where the Briton took a 5-2 lead. But all the fast-rising Pouille’s skills came to the fore in drop shot, backhand and net winners to turn the score around and grab the set, 7-6(6).

Edmund had played well, but the quality of the Frenchman was proving to be too good: 10/10 on his second serve, for example, and a tally of 14 winners to four from Edmund.

The Briton had his chances in the third set, but he failed to convert a break point in fifth game. He then delivered two double faults to offer up a break chance in the sixth game, and Pouille took it for 4-2. The Frenchman went on to serve out the rubber, 6-3, in around two hours.

The No2 Briton after the absent Andy Murray, No44 Daniel Evans, arguably faced an even tougher task against the No68 ranked Jeremy Chardy.

Evans reached the final in Sydney at the start of the year, beating Dominic Thiem along the way, and made the fourth round at the Australian Open, beating Marin Cilic. After scoring a win and a loss in the first round of Davis Cup action against Canada, he twice beat Dustin Brown—in Dubai and Indian Wells—but arrived in Rouen with a 3-4 win-loss since Melbourne.

His biggest problem was the surface: Evans is not a clay-court player, indeed had not played on this surface, at any level, since losing in the first round of qualifying at Roland Garros almost three years ago. His last win on clay was in Davis Cup, but in a dead rubber in 2013.

The 30-year-old Chardy, meanwhile, had a better record on clay than on any surface, and his only title, way back in 2009, came on the red stuff. And despite not playing in Davis Cup for six years, he was clearly in form in Rouen, getting the late nod over the higher-ranked Gilles Simon to play this tie.

Chardy stormed to a 5-0 lead, not because Evans was playing particularly poorly but the Frenchman is a shot-maker. The downside of Chardy’s all-guns-blazing tennis is that he can blow cold as well as hot, and that is what happened as he served for the set. A sequence of errors, and Evans broke for 5-2.

However, Chardy quickly turned on the form again, firing a forehand winner for break point and then a backhand to break for the set, 6-2.

Evans started the second set better, staying on level terms until the fifth game, but then Chardy broke for 4-2, and needed only to serve it out, 6-3, with some more fine forehands. He was now up to 22 winners for 17 unforced errors, and had notched up nine aces and a top speed of 134 on serve.

Evans was becoming frustrated, and was playing too far back to wrench any real control from the Frenchman. He was straight away 2-0 down, and came under pressure on each subsequent service game. He held on until serving to save the match, but went 15-40 down, and Chardy hammered home the win from the baseline with a break, 6-3, in just an hour and 50 minutes.

The fate of Great Britain, then, lies with the doubles pairing of Jamie Murray and Dom Inglot, who take on Nicolas Mahut and Julien Benneteau before the reverse singles on Sunday. Both Murray and Mahut have enjoyed No1 rankings in doubles: The rubber, then, is expected to be a tight one.

In Serbia, Novak Djokovic made his return from the injury that prevented his attempt to defend the Miami Masters title last week, to win the opening rubber against Spain’s Albert Ramos-Vinolas, 6-3, 6-4, 6-2, and Viktor Troicki made it 2-0 to Serbia after beating Pablo Carreno Busta, 6-3, 6-4, 6-3.

The winner of the tie will play Great Britain or France in the semi-finals in September.