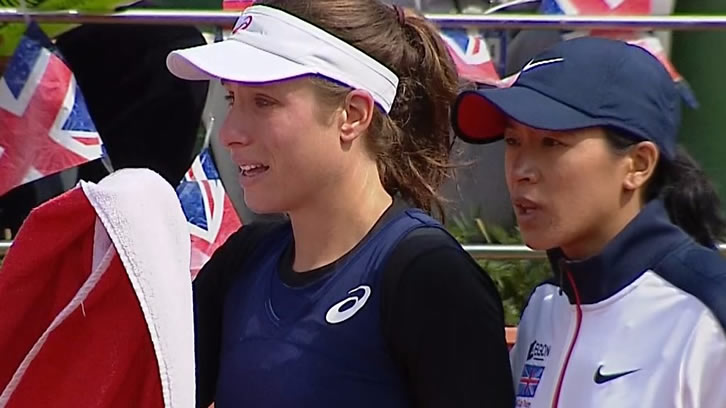 Johanna Konta was in action for GB in Romania Photo: BBC Sport

With so much at stake for both nations—a place among the elite 16 in tennis’s Fed Cup—and with two of the sport’s top players—Great Britain’s Johanna Konta and Romania’s Simona Halep—at the centre of the action, it is unfortunate that this opening day in Constanta will be remembered for very different reasons.

Ilie Nastase, former world No1, a two-time Grand Slam champion, and one of the most memorable players of the 1970s, has been Romania’s Fed Cup captain since last October, but based on his behaviour both before and during the World Group 2 Play-off this weekend in Romania, he will not hold the position for very much longer.

The ITF had already announced an investigation into comments he made during a pre-tie press conference about Serena Williams, and he went on to embarrass GB captain Anne Keothavong by twice asking for her room number, and blackened his copybook further by then confronting the Press Association journalist who reported his words in another press conference.

So much, so bad. But things were about to get nastier still. During the second match between British No1 Konta and Romania’s Sorana Cirstea, ranked 62, Nastase is reported to have made highly abusive comments to the umpire, Keothavong, and Konta after his player lost the first set.

Amid raucous scenes, and long discussions between the umpire and other officials, Nastase was escorted from the court and his place taken by Romanian player Monica Niculescu.

And the problems did not end there: Konta, serving at 2-1, was then subjected to abuse from the crowd, had her serve broken, and turned to her captain in tears for support. The British team left the court and the match was suspended for more than 20 minutes, while the admirable Halep took charge of the Romania crowd by appealling for good behaviour: “Respect the players and speak nice.”

That Konta came back to court, 3-1 down, and reeled off five straight games to level the tie, 6-3, was a huge credit to both the Briton’s tennis and her mental resolve. One should not, of course, also underestimate the emotional impact of the afternoon’s drama on Cirstea, and the ITF subsequently announced that Nastase has had his accreditation removed for the remainder of the tie.

For now, the Play-off that will determine which nation advances in 2018 is poised, as expected, at one win apiece.

GB’s No2, Heather Watson, has recently slipped outside the top 100 after a tough start to 2017. Even though her fighting spirit always rises to the challenge of Fed Cup, she had a mountain to climb against Halep when the two women took to the dry but very cool clay in Constanta. Halep had won all three of their WTA contests as well as their only Fed Cup meeting—and with the crowd behind her, Halep soon asserted herself on the clay.

A quick exchange of breaks was followed by some close games as Watson held her own to 4-4, but then Halep went on the offensive, broke to love, and held for the set, 6-4.

From there, the Romanian raced away, full of confidence and running as she drew increasing numbers of errors from Watson. The Briton would make just three winners for 12 unforced errors in the set, was broken to love twice, and suffered one last break to concede the match, 6-1, in just 68 minutes.

For Konta, Cirstea was a distinctly unknown quantity substituted in at the last minute in place of Irina-Camelia Begu. This was their first meeting, and although the Romanian, like Watson, also had little to show for her season so far, much would depend on Konta finding her range in conditions that did little to enhance her power baseline game.

The Briton, though, opened strongly in the windy conditions with a love hold and broke in the third game.

Cirstea then proved a tough nut to crack in the middle stages of the set, and Konta had to face down three break points to keep the scoreboard on her side, 4-2. The challenge sharpened the Briton’s game, she broke again, and thumped a big serve to hold, 6-2, after 35 minutes.

Then events took that expected turn and Konta looked vulnerable against an aggressive Cirstea buoyed up by the intimidating crowd. That the Briton returned so soon with such equilibrium bodes well for what lies ahead—what is likely to be the key match of the weekend.

If the two main-tour meetings of Konta and Halep are anything to go by, their Sunday showdown should be a thriller. Halep was one of Konta’s victims on the way to her biggest title in Miami last month, though the Briton had to come back from set down and edge a second set tie-break before sealing the match after two and a half hours.

Konta’s other win came in her break-out season of 2015. Having made it to the fourth round at the US Open via qualifying, beating No9 Garbine Muguruza and No18 Andrea Petkovic along the way, she did the same in Wuhan, beating Halep 7-5 in the third set.

However, before Konta’s rise to the top, she did meet Halep in the group stages of the Fed Cup, back in 2014, and that was a comfortable win for the Romanian. What’s more, Halep had the advantage of an adoring home crowd plus the clay—and she is a former French Open finalist and the reigning Madrid champion.

How off-court events will affect things, it remains to be seen. The ITF concluded:

“Mr Nastase was asked to leave the court by the ITF referee for unsportsmanlike conduct, having already received two official warnings. Mr Nastase was also removed from the grounds due to serious misconduct….and will play no further part in the tie.”