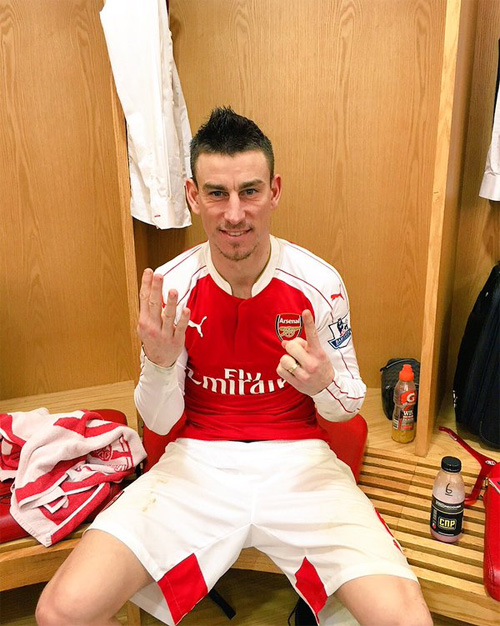 Gary Neville has criticised Laurent Koscielny for not trying to play past half-time in Arsenal’s 2-2 draw with Manchester City on Sunday.

The French defender picked up an injury before the break and was subbed off at half-time as the north London side played out a stalemate with Pep Guardiola’s men.

Koscielny was also forced off during Arsenal’s loss to Bayern Munich in the Champions League earlier in the season and Neville was not impressed by what he saw as a lack of commitment from the France star.

The former Manchester United defender also criticised Theo Walcott and Mesut Ozil for their displays in the draw against the Citizens.

Speaking to Sky Sports after the game, Neville said: “I might be being a bit harsh here, but I’m going to say them anyway.

“Koscielny always goes off. He’s a centre-back. He plays to half-time and then goes off. He might have a bit of a problem with his Achilles and I might be being very harsh, but he went off against Bayern Munich and went off in a big game today.

“Walcott trudges off the pitch. He hasn’t played well, but his attitude is, ‘I’ve scored a goal, you shouldn’t take me off.’ Yes you should, you were poor and that’s a matter of fact.

“Mesut Ozil goes through on goal and bottles out of a challenge when his manager’s backside is on the line. Go for a 50-50 or nick in front and win a penalty.

“There’s three instances today and I’m being harsh, but if you’re talking about throwing the cat among the pigeons, let’s do it. Let’s throw it out there.

“Arsene Wenger deserved for Koscielny to at least have a go for five minutes in the second half. Go on mate, have a go for us. No, he didn’t.

“Theo Walcott should sprint off the pitch and shake the manager’s hand and say, ‘Thanks very much for giving me a game today. I’m lucky.’

“Mesut Ozil should go for a 50-50 with the goalkeeper. That would help, wouldn’t it?”

Arsenal will look to return to winning ways in the Premier League when they host West Ham United at The Emirates on Wednesday night.

Arsene Wenger’s men are currently in sixth place in the table as they chase a top-four finish in the Premier League.

Ian Wright: What needs to happen with next Arsenal manager