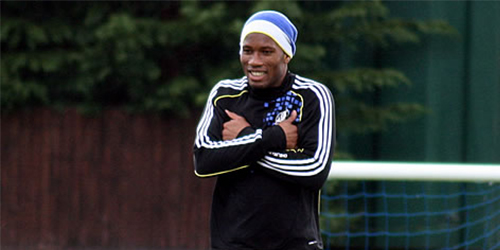 Didier Drogba has revealed that he has spoken to Antonio Conte “many times” and has praised the impact that the Italian has had at Chelsea this season.

Conte has earned plenty of praise for helping to reverse Chelsea’s ailing fortunes after the Blues ended up 10th and without a trophy last season.

Chelsea are currently four points clear at the top of the Premier League table in the wake of their disappointing 2-0 loss to Manchester United at Old Trafford on Sunday.

However, the Blues are still chasing a domestic double this season as they prepare to take on Tottenham in the semi-finals of the FA Cup on Saturday afternoon at Wembley.

Blues legend Drogba has revealed that he is a keen admirer of Chelsea boss Conte – and that he has spoken to him on a number of occasions.

Speaking on Soccer AM, Drogba said: “I would have loved [to play for Conte]. I think I would have scored a few goals.

“The way the team is playing everything is set up for the strikers.

“I’ve spoken to him many times and played against him when he was at Juventus.”

Chelsea have been the Premier League’ top performing team this season as they chase a second title in three seasons.