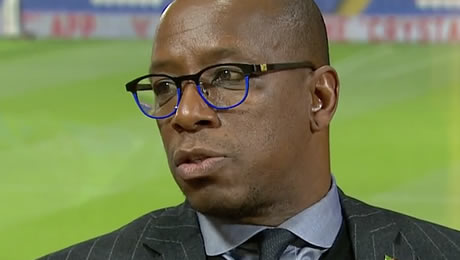 Ian Wright has warned Chelsea that Tottenham are likely to crank up the pressure even more as the Premier League title race hots up.

Spurs have been in fine form in recent weeks and have managed to slash the Blues’ lead at the top of the table down to just four points with six games left to play.

Chelsea were thoroughly outplayed as they were beaten 2-0 by Manchester United at Old Trafford on Sunday, while Tottenham were 4-0 winners over Bournemouth.

It all makes for an intriguing end to the season as the final few weeks of the campaign begin to take shape.

And Arsenal legend Wright is fully expecting to see Mauricio Pochettino’s men keep the pressure on the leaders in the closing few weeks of the season.

Speaking on BBC Sport’s 606 podcast, Wright said: “It puts the pressure on Chelsea to perform. People say Chelsea’s run-in is great because they’ve only got Manchester United out of the top five so even if they lose, it doesn’t make a difference.

“But it does make a difference if Spurs continue to win their games.

“Tottenham are doing what you need to do in that situation: win their games and win them convincingly.”

Chelsea take on Tottenham in the FA Cup semi-finals at Wembley on Saturday afternoon as they look to keep their hopes of a domestic double alive.