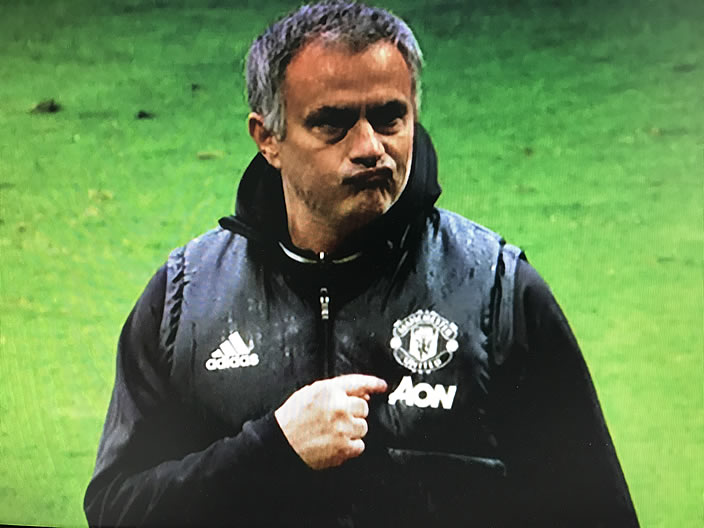 Jose Mourinho sent a defiant message to Chelsea supporters as he walked off the Old Trafford pitch following Manchester United’s 2-0 win over the Blues at Old Trafford on Sunday.

The Portuguese coach confidently pointed to the Manchester United badge on his chest as he approached the tunnel following the final whistle at Old Trafford, as the photo above shows.

Mourinho watched goals from Marcus Rashford and Ander Herrera hand his side an impressive 2-0 win over the west London side as Manchester United blew the title race wide open.

The former Chelsea manager has watched his team lose twice to the Blues at Stamford Bridge this season but was clearly delighted to see Manchester United gain some revenge on Sunday.

In comments that are likely to further frustrate Chelsea fans, Mourinho then also suggested that his Manchester United team should have beaten the Blues in the FA Cup at Stamford Bridge last month, telling Sky Sports after the game: “We went to Stamford Bridge in the FA Cup with same tactics and the game was totally controlled when we played with 11 players, and only the decision that made us play with 10 men for the second half, plus some minutes in the first half.

“That gave Chelsea a chance to be dominant, but we knew that if we played this way then it would be very difficult for them.”

The result left Mourinho’s men in fifth place in the Premier League table as they try and claw their way back into the top four before the season is out.

Mourinho, who was sacked for a second time by Chelsea in December 2015, will now turn his attentions towards preparing his side for their Europa League quarter-final second-leg clash against Anderlecht at Old Trafford on Thursday night.