Match for Africa 3 is back, and Roger Federer has recruited the newest number one on the block, Andy Murray, to his cause 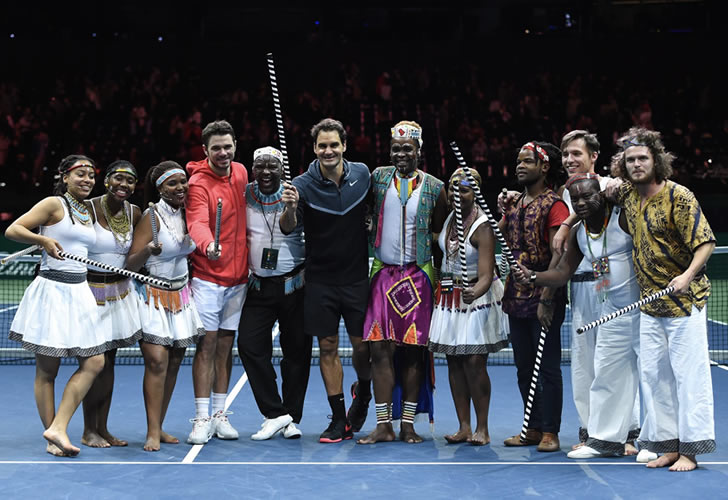 It is not the first time that Roger Federer has thrown his weight behind a big fund-raising event in homeland Zurich and it will almost certainly not be the last.

For with each passing year, Federer is committing more time and energy to the Foundation he set up in his name after winning Wimbledon for the first time back in 2003.

The first Match for Africa—a name signalling the focus of his Foundation, education for underprivileged children in Africa—was played in 2010, and featured his greatest rival and then No1, Rafael Nadal. The match raised $2.6 million, and the two raised as much again for the Spaniard’s charity in a reciprocal match in Madrid a week later.

Come 2014, and it was Swiss colleague Stan Wawrinka who helped Federer out.

Last year, Federer was due to play the third exhibition in November, but was forced to pull the plug on the entire post-Wimbledon season after surgery to his knee earlier in the year.

Now, though, Match for Africa 3 is back, and Federer has recruited the newest No1 on the block, Andy Murray, to his cause.

Murray proved to be a prescient choice. The Briton explained in Dubai that this collaboration had been a long time in the planning—before Murray’s surge through the latter half of 2016 to claim the No1 ranking along with his first World Tour Finals title in London.

“It’s hard for sure [to fit in these events] because, to make it work, you also need to have ideally one of the top players. You need to work with both your schedules, so you have ask quite a long way in advance. And Roger spoke to me about it the first time during the French Open last year.

“I spoke to him on the phone, and then my team spoke to his about potentially coming to Scotland, and that was agreed about a month ago.”

A lot has happened to both men since Murray and Federer signed on the dotted line, however.

A rejuvenated Federer took the hard-court season by storm, winning not just his 18th Major at the Australian Open but the notoriously tough “sunshine double” in Indian Wells and Miami. After surging from No17 to No5, he announced he would pull out of the clay-court season until Roland Garros to rest and recuperate—thus making his victorious appearance this week in front of his home crowd all the more special.

In contrast, after winning his first Dubai title, Murray looked like the one who might have to default after he withdrew from the Miami Masters with an elbow injury. Not a bit of it.

News of the world No1’s return to training on the clay near his next scheduled tournament, the Monte-Carlo Masters, confirmed Murray was up and running.

So Zurich will become their first meeting since the summer of 2015, the first since Murray became No1, and the first since Federer’s re-emergence as the tour’s most formidable force.

As for Federer’s plan to let his mind and body recover from his globetrotting 19-1 start to 2017, that took an unexpected turn. Days after his Miami victory, he announced Match for Africa 4—not next year, nor even at the end of this season, but at the end of this month. It will be played, with the backing of famed philanthropist Bill Gates, on the other side of the world, on the USA’s Pacific coast in Seattle.

Yes, Federer is clearly beginning to bring his Foundation front and centre of his career, an integral component in what will be a carefully managed playing schedule for however many more years he chooses to play.

As for Murray, it was certainly something of a coup to recruit Federer to his annual fundraiser. The Olympic and Wimbledon champion launched his own event, “Andy Murray Live”, on his home turf of Glasgow Scotland last autumn. And within hours of announcing that Federer would headline this year’s event, the 10,800 tickets had sold out.

The aim of Murray’s project is to build a legacy tennis event in the UK whilst raising funds for two charities: the local Glasgow organisation, Young People’s Futures, and for UNICEF, of which Murray is a long-standing UK Ambassador.

But like Federer, Murray has been a campaigner for many causes since his early days on the tour. He organised charity matches in aid of the Royal Marsden after friend Ross Hutchins was diagnosed with Hodgkin’s lymphoma and Elena Baltacha died of liver cancer. He also supports Malaria No More, the World Wildlife Fund and the Royal British Legion’s Poppy Appeal, among others.

It is no accident, then, that Murray has won the ATP’s coveted Arthur Ashe Humanitarian Award, in 2014 in recognition of his many projects. Federer, for his part, has won the Award twice: in 2006 and 2013.

Murray, in launching this year’s Glasgow exhibition, said: “To get the opportunity to play against [Roger] and has been great for my game… Obviously, it’s been hard because of how good he is, but I’ve loved competing against him and he’s always been good to me away from the court. That’s important too.”

Federer said of Murray’s contribution to the Match for Africa: “I am extremely happy that Andy—one of the best tennis players in the world—immediately agreed to come to Zurich to help raise money for my foundation. I’m even happier that I’ll finally get to play in front of my fans again!”

About the Federer Foundation

For more than 13 years, the Foundation has engaged in education programmes for children living in poverty in Africa (his mother’s birthplace) and Switzerland.

· 4 members of the family on the Board of Trustees

Every donation by phone, SMS or online will be entered into the competition to win fantastic prizes from our event partners. These include a Meet & Greet session with Roger Federer, a trip to South Africa, a fully automatic Africa coffee machine, and an annual subscription for Sunrise.