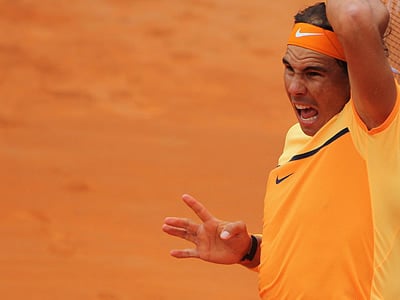 It was clear from his earliest days, in David Goffin’s first Grand Slam appearance, that here was a player with the potential to be one of the first of ‘Generation 90’ to make an impact.

It took the slight, quietly-spoken and nimble Belgian time to break through the ranks to the top 10—a great opening to 2017 finally achieved it this February after his first quarter-final in Australia and back-to-back finals in Sofia and Rotterdam—but that first French Open run, when he took the opening set over Roger Federer before losing to the Swiss in the fourth round, was memorable.

And although Goffin is not the most powerful player on the tour, he steadily evolved into a formidable opponent: Just ask Dominic Thiem, Stan Wawrinka, Tomas Berdych—and this week, for the first time, Novak Djokovic.

Clearly at home on Monte-Carlo’s clay, Goffin had worked his way through a tough draw that included both Thiem and Djokovic, and arrived at the ultimate clay test, a first meeting with nine-time champion Rafael Nadal, and with more wins this year than any other player: 23 of them.

And while Nadal is a popular champion in this glamorous corner of the Monaco, Goffin had certainly picked up a lot of fans—fans drawn to his quicksilver movement, his light footwork and the precision and variety of his shot-making.

Add in a comeback win from a break down in the final set against former champion Djokovic, and Goffin was making a name for himself in the Principality.

It looked as though he would ride that same confidence to take the first set over Nadal, too. Goffin swung Nadal across the wide extremes of the court, chased down drop shots, defended well, and even slotted away his serve with relative ease. He broke in the third game, held for 3-1, but then the drama began.

The fifth game would last more than a quarter of an hour, would endure nine deuces, but should have been done and dusted long before. Nadal fired a ball long on game point for 4-2, but the umpire, unbidden by either player, went to check the call and picked the wrong mark.

Goffin is not one to make a fuss, but he was devastated by this decision—and a televised hawkeye showed the correct spot was indeed well out. And so Goffin began to defend deuce after deuce, saved one break point, but saw Nadal growing in confidence as the Spaniard’s forehand cranked up.

The Belgian finally succumbed on the second break point, and it was all square, 3-3.

The crowd, many of whom had spotted the injustice of the call, booed, and did so again as Nadal pounded his way to a hold.

The Spaniard began to force more misses from the Belgian, broke, and held for the set, 6-3. The match had taken a 180 degree turn: Could Goffin possibly regroup to halt the Nadal juggernaut?

As if the Belgian did not have enough to think about, he was made to wait a little longer to serve as Nadal took a break from court. Goffin did hold his opening service, but in the third game, he could not hold off his opponent’s increasingly dominant shot-making and conceded an easy break.

The Belgian was broken in spirit, too, while Nadal seemed visibly to grow in stature and purpose. The Spaniard broke twice more, winning the last point with his signature running forehand pass, 6-1.

Now Nadal has history on the horizon: He could win a record 10th Monte-Carlo title—something no other player has done at any tournament—and a record 50th title on clay. First, he has to take on compatriot and fellow left-hander, Albert Ramos-Vinolas, who he has beaten in both their previous matches.

For Goffin was not the only man on this semi-final day to be making his debut among the last four in Monte-Carlo.

With former champion Wawrinka, world No1 Andy Murray, No7 Jo-Wilfried Tsonga and No9 Tomas Berdych all beaten before the quarter-finals, and No5 Marin Cilic beaten to the semis by giant-killer Ramos-Vinolas, the No15 ranked Spaniard would take on No11 Lucas Pouille in a battle for each man’s first Masters final.

Ramos-Vinolas took up where he had left off to grab the opening set, 6-3, but the second set was much tighter as they edged to what looked like a tie-break, only for Pouille to break and serve out the set, 7-5.

But Ramos-Vinolas was far from done or down, and he took a 3-0 lead in the decider. Pouille needed treatment to his back, but that was not enough to hold off the Spaniard, despite this now being his third three-setter in a row. He surged on to the finish line after two and a quarter hours, 6-1, to assure his breakthrough into the top 20 next week.

He could go as high as No14 with victory, but he will know as well as everyone else gathered at the Monte-Carlo Country Club tomorrow afternoon that he will have to play the match of his life if he is to deny Nadal. Many before have tried—and many have failed.