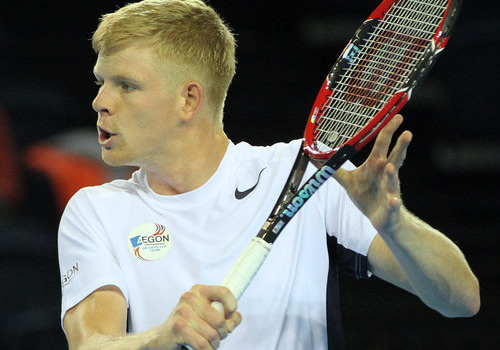 Kyle Edmund will take on Rafael Nadal in the last 32 Photo: Marianne Bevis

Daniel Evans and Kyle Edmund have grown used to each other’s tennis and company in the last few years courtesy of Great Britain’s rise in Davis Cup fortunes.

The two men were part of the title-winning squad in 2015 and the semi run last year, and took their nation to the quarter-finals this season, too.

But only once have they faced one another across the net, and that was a year ago in the Dallas Challenger. It happened to be the title match, and it went to the younger man, 22-year-old Edmund.

Indeed last year, Edmund took great strides to No41 in the world, ticking off ‘firsts’ time and again. After winning two Challengers, he reached the quarters at Queen’s Club, made the fourth round at the US Open—beating the likes of Richard Gasquet and John Isner before falling to the top seed Novak Djokovic.

He backed that up with a quarter-final run in Beijing, claiming another top 20 scalp before being halted by the future No1, Andy Murray. Edmund ended the year with a semi finish in Antwerp.

But 26-year-old Evans was about to give chase with some of the most focused and committed tennis of his career. A year ago, he was ranked 124, at the start of 2017 he was up to 66 after picking up three Challenger titles from five finals during 2016 plus the third round at both Wimbledon and the US Open.

Evans then opened this year with his first main-tour final in Sydney and a top-10 win over Dominic Thiem. He beat another top-10 man and former Grand Slam champion, Marin Cilic, on his way to the fourth round at the Australian Open, and became GB’s second-ranked man after Murray.

Now, as both he and Edmund prepared to play their first ever matches in the Monte-Carlo Masters, that second spot was as stake again. They were, as ill fortune would have it, drawn against one another in their opener, Evans ranked 44 and Edmund 45. The winner would be leave Monte-Carlo as the No2 Briton.

The odds were firmly on Edmund’s side, however. Clay was not Evans’ surface: He had won only two matches in a total of four played on the red stuff, while Edmund had already reached the second round at the French Open twice—though he had never before played in one of the three clay Masters tournaments.

And the younger man’s nerves in this debut in a clay Masters showed in some tense tennis in the opening games. He began with two double faults, and Evans broke three times as he countered Edmund’s attack to his single-handed backhand with bravado.

The errors flowed from the Edmund forehand—his undoubted strength—and although he got one break back, he was quickly facing 1-4. Gradually, though, the forehand made inroads, and gave Edmund the time and space to move in for the finish. He broke twice in a row and held to love with a forehand winner.

Evans stopped the rot with a love hold of his own, but Edmund looked increasingly dangerous as he settled into the pace of the court. He pulled off a stunning forehand return-of-serve winner to break for the set, 7-5, his 12th of the match.

The crowd on Court des Princes was growing fast to lap up both some fine tennis and some glorious sunshine. Also watching from the players’ walkway high above was this week’s top seed, Murray, who was joined by No8 seed Grigor Dimitrov—perhaps scouting the men who are drawn in his own quarter.

Now, Edmund was on a roll, and this time, he fended off break points in the first game, by running Evans ragged. He held to love for a 2-1 lead, and broke to love with some really aggressive play. Edmund headed to the finish line with another break, courtesy of three straight forehand winners, and after a couple of nervous shanks in the last game, he fought off break point to seal the win, 6-1, after an hour and 20 minutes.

Edmund’s strength was written all over the closing statistics: 24 forehand winners from a tally of 29. Yet he began to show some great touches, too, including the occasional drop shot and sliced return.

But his reward, aside from overtaking Evans in the rankings come the end of the tournament, is not an enviable one. He will now face the nine-time and defending Monte-Carlo champion Rafael Nadal on what is indisputably the Spaniard’s favourite surface in one of his favourite venues. It is another ‘first’ for Edmund, and one he will probably both relish and dread.

For after a difficult 2016 marred by a wrist injury and a truncated season, Nadal has bounced back to some formidable form this year even before hitting the clay. He made the final of the Australian Open, losing in five compelling sets to Roger Federer, and then reached the final in Acapulco. Federer halted him again in Indian Wells, and to rub salt into the wound, in the Miami final, too.

But Federer is not contesting this year’s clay Masters: Nadal will instead have to deal with the returning Djokovic in the semis and Murray in the final if he is to win a remarkable 10th title in Monaco.

For now, however, Edmund must take all the confidence and attack he used at the end of his first match into the start of his second. Only then will he be able to relish rather than dread the ultimate clay test.

Elsewhere in this same half, No12 seed Roberto Bautista Agut survived a tough three-setter against Nikoloz Basilashvili to set a meeting against Diego Schwartzman, who beat Bernard Tomic, 6-1, 7-6.

In the top half, No16 seed Pablo Cuevas has little trouble against Viktor Troicki, and next plays Joao Sousa.