Per Mertesacker took part in full Arsenal training on Saturday morning as the Gunners completed their final preparations for their crunch clash with Tottenham at White Hart Lane on Sunday.

Mertesacker is yet to make a single appearance for Arsenal this season after suffering a serious knee injury last summer and requiring surgery to fix the problem.

It remains to be seen whether Mertesacker will feature for Arsenal before the season is out but he looked to be in good spirits as the Gunners trained at London Colney on Saturday morning.

Also pictured in action during the session were the likes of Alexis Sanchez and Mesut Ozil as Arsenal look to stretch their three-game winning run with victory at White Hart Lane this weekend.

Arsenal head into the game on the back of their 1-0 win over Leicester City on Wednesday night. Tottenham, meanwhile, beat Crystal Palace 1-0 at Selhurst Park last week. 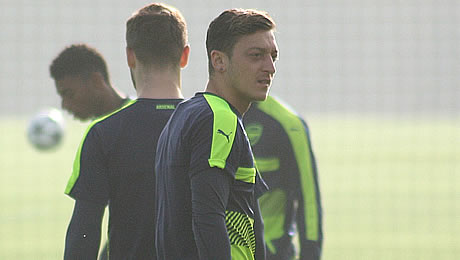 Here are some of the best pictures from Arsenal’s latest training session.

Photo: Pedro and Cesc Fabregas all smiles on Chelsea flight ahead of Everton clash