He may not end the year at No1, may not win Wimbledon but you sense that Roger Federer will still be quite happy - with his career and his life 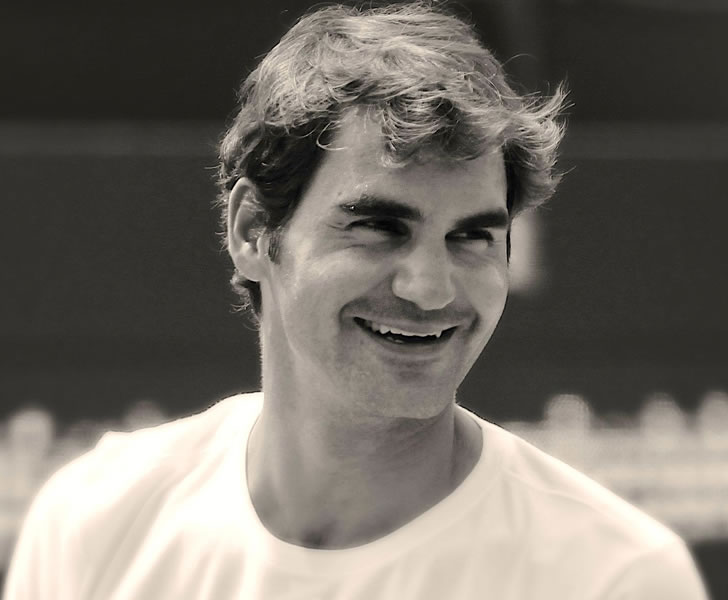 When the draw for the Australian Open was made almost three months ago, things looked mighty tough for the man who, in all honesty, had no more to prove on a tennis court.

And all that aside from a popularity writ large in the sport’s awards: selected 12 times by fellow players for the Stefan Edberg Sportsmanship Award and for 14 straight years as winner of the Fans’ Favourite Award.

Along the way, he has been notching up age related ‘firsts’, too, but the most sinister came early last year: At 34, Federer underwent surgery for the first time, a knee operation that would also cut a knife through his season.

Only six months after rising back to No2 in the world with six titles from 11 finals, he would play no part in the last six months of 2016.

Now here he was, back in Australia, ranked at 17 and facing the prospect of a slip outside the top 30 if he lost early. And for a man of 35 with no matches in six months, not to mention having tasted some rather enjoyable family time with his four children and showbiz time with his wife in the interim, the prospect of facing higher seeds from the third round on might have made him think twice.

He did, he assured media and fans, come with no expectations:

“I’m cautious… clearly an underdog this time around.”

That was affirmed in his opening four-setter against Jurgen Melzer, though it proved to help Federer bed-in mentally:

“I tried [to focus] in the first two sets until I realised it was just consuming me. It was just like it’s too much already. Said, OK…. Just calm down a bit, try to play more freely.”

That would be the key to unlock his run through Melbourne and then North America. “Playing free” became his watchword, and his first seed in Australia, No10 Tomas Berdych, felt its full impact.

Here was Federer taking the ball on the rise, on the offensive at every opportunity, and with a remodelled backhand that he could pound with pace and top-spin, a shot that dovetailed with the flexible, slicing, dropping one-hander of old.

The next round cranked up the challenge. No 5 seed Kei Nishikori took the first set tie-breaker, and pressed Federer through five sets and three and a half hours. The Swiss was, it became clear, well prepared not just tactically and mentally but physically too.

Then he had to resist No4 seed, Stan Wawrinka in another five-set, three-hour marathon, and finally, he faced No9 seed and the most testing rival of his career, Rafael Nadal. Three hours 38 minutes and five sets later, Federer had done what even he thought was impossible: won his 18th Major, his first in four and a half years, and his fifth Australian title, 13 years after his first.

He afterwards talked more about the philosophy that has always underpinned his flowing, all-court tennis but that was now as rejuvenated as Federer’s body.

“I told myself to play free… You play the ball, you don’t play the opponent. Be free in your head, be free in your shots, go for it. The brave will be rewarded here.”

Come Dubai, he put an unexpectedly early loss down to residual tiredness from Australia, but it was, perhaps, a useful reminder that, these days, he has to pace himself with ever greater ruthlessness.

In the event, he was able to take another tough draw in Indian Wells in his stride, not a set dropped as he ploughed through Nadal in the fourth round, then Wawrinka in the final.

Now he was inside the top eight, but still drew another uphill task in Miami, with Juan Martin del Potro in his second match, followed by four top-20 players. And his stubborn streak also came into play.

Federer would deny an on-fire Roberto Bautista Agut a set in a two-hour two-tie-break dog fight. He would not let the pricked pride of Berdych claim revenge in an edge-of-the-seat final tie-break after another two hours. And he refused to let young star Nick Kyrgios repeat the three-tie-break win of their first match in Madrid: Three hours 10 minutes of compelling, charismatic tennis ended in the closest of wins for Federer.

With a third victory over Nadal in as many months, Federer claimed his third title of the year, his third in Miami, his third “sunshine double”—11 years after the last. Asked if his comeback was now over, he smiled: “Yes, I would think so.”

And it has been, by any measure, an astonishing comeback: a 19-1 run, seven wins over top-10 players, the oldest man to win a Masters—let alone two—and the lead over greats such as Novak Djokovic, Nadal, Pete Sampras and Andre Agassi in what the ATP calls “Big Titles”: Majors, Masters and ATP Finals. Federer now has 50 of them.

But then Federer announced that he was unlikely to play any clay tournaments until the French Open, which begins at the end of May… “if that.”

It goes without saying, at this elite level of any sport, that hard work and dedication are essential to success, and Federer has referred several times since his comeback to the positive impact of the training and practice he put in during his time away.

But during almost 20 years on the tennis treadmill, he has also recognised the importance of rest, both for mind and body. He has become skilled at eluding the cameras when he is off duty, and away from tournaments or high-profile events with friends or sponsors—fashion shows, meet and greets, photo-shoots for magazines, even the Oscars—he finds privacy and seclusion. There are occasional paparazzi shots on the streets of New York or, most recently, on the beach in Miami, but even these are rare.

And while he is a sociable, extrovert individual who clearly enjoys company, takes media and PR demands in his stride, and will party with the best of them when his work is done, his personal life is personal.

Indeed his off-court life seems guided by those familiar watchwords: “Be free in your head” and “the brave will be rewarded.”

It is brave to bypass a long stretch of the tour after reaching No4 in the rankings, to watch Murray, Djokovic, Wawrinka, Nadal, and possibly the likes of Kyrgios, build their points and overtake Federer at the top of the Race to London.

But if six months away has brought this outstanding athlete back with such energy, joy and success, it is hard to argue against. He would like to win another Wimbledon, maybe a US Open, and perhaps score one more victory at the World Tour Finals, but he also wants to enjoy his family, and let them enjoy him.

For at this stage in his life, recuperation is many faceted. He explained in the aftermath of Miami:

“At the end of the day, I need to look out for my health, that I’m happy in all parts of my life, personal, private, on-court life, professional life, and I can’t keep this pace up on every single day. Just too much, and the desire will run out.

“I would rather take a step back and then really come back with a lot of energy and happiness. Then I can share that with everybody. Otherwise you will see that all I want to do is get out of here. I don’t want to be that guy. I really don’t.”

For now, though, the happiness is tangible. Only such a confident and positive attitude could drag him back to the daily grind after so many years, yet: “I’m looking forward to going back in the gym and working on the stuff I couldn’t do for the last few months.”

And downtime is an essential part of it, and always has been for the Federers. He does not even fancy the idea of a book, despite many offers.

“I’ve been very cautious… I’m not sure if I want to shout about [my life]… That means invasion of privacy with my family, and I’m honestly not in the mood for that either. I’m just tired of too many outside people in my life.”

So he may not end the year at No1, may not win Wimbledon, may not break any more records, but you sense that he will still be quite happy—with his career and his life.