Lucas Perez is closing in on a return to action for Arsenal after he took part in full training on Tuesday morning ahead of Wednesday’s Premier League trip to Southampton.

The Spanish striker has been sidelined with a thigh injury and has not featured for Arsene Wenger’s side since the defeat by West Bromwich Albion back in March.

However, the forward looked to be in good shape as he took part in full training at London Colney on Tuesday.

Also pictured in action during the session was defender Shkodran Mustafi, who has not featured since picking up a thigh injury following the defeat by Crystal Palace on 10 April.

Alexis Sanchez and Mesut Ozil were among the other Arsenal stars to be pictured in action for the Gunners at London Colney on Tuesday.

Arsenal head into the game looking to keep their top-four hopes alive after their 2-0 win over Manchester United at The Emirates last weekend. 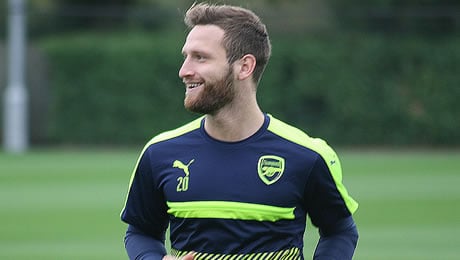 Here are some of the best pictures from Tuesday’s Arsenal training session.

Cesc Fabregas: This is what Chelsea have done so well this season