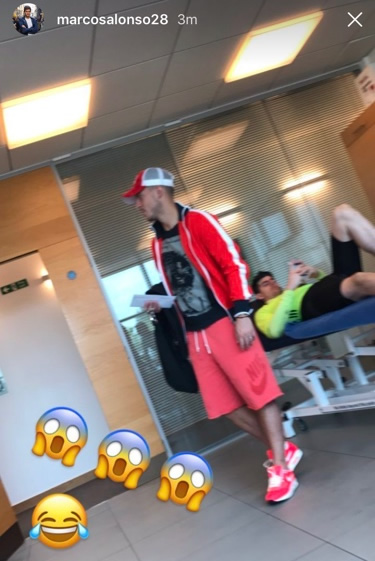 The goalkeeper will be hoping to feature for Chelsea when the Blues take on Middlesbrough at Stamford Bridge in the Premier League on Monday night as they look to take a step closer to the title.

Speaking at his pre-match news conference on Friday, Conte revealed that Courtois had been training at Cobham and that he didn’t see any injury concerning about the goalkeeper.

Chelsea defender Alonso snapped the picture above in the Cobham treatment room on Saturday afternoon after training and posted it on his personal Instagram story.

The west London side head into their crunch clash against Middlesbrough on Monday night knowing that they need just two wins from their remaining four Premier League games to win the title this season.

Chelsea are four-points clear of second-placed Tottenham after Spurs were beaten 1-0 by West Ham United at the London Stadium on Monday night.