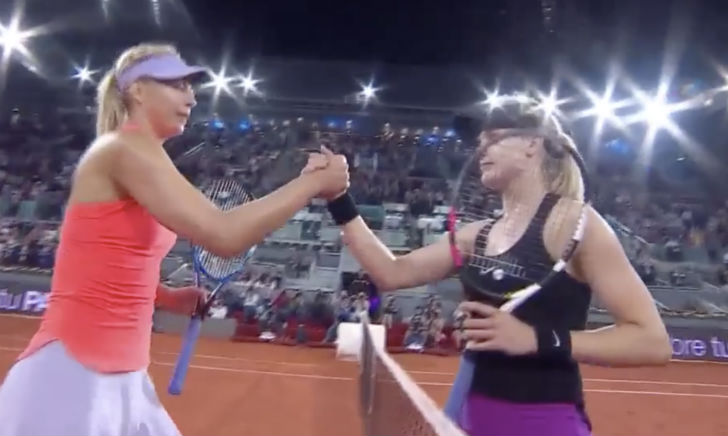 It was a day of mixed fortunes for the top two seeds in the lucrative and prestigious Mutua Madrid Open, one of only four Premier Mandatories on the women’s tennis tour, and it came hot on the heels of plenty more upsets in the opening round.

Big names like the in-form No11 Elina Svitolina and No6 seed Johanna Konta, winner of the last Premier Mandatory in Miami, were sent packing, and they were followed by French Open champion, No5 seed and home favourite Garbine Mugurza. Add Elena Vesnina, Madison Keys and Mirjana Lucic-Baroni, and the draw was opening up.

Come the second round, and the tournament lost its No2 seed, Karolina Pliskova, in a mere 78 minutes, beaten 6-3, 6-3, by world No22 Anastasija Sevastova. And soon after, it was very nearly the same story for the top seed, Angelique Kerber.

She faced No37 Katerina Siniakova, and after pulling back to level in the second set, the German stared defeat in the face at 3-5 down in the third. The 20-year-old Czech served for the match, but perhaps nerves, perhaps inexperience, took control, she played too often to Kerber’s left-handed forehand, and paid the price. Kerber broke and completed a run of four games to grab the win and a place in the last 16.

The No8 seed Svetlana Kuznetsova also stared down defeat against No39 Alison Riske, losing the first set and down a break in the second. But rather like Siniakova, Riske could not seal the deal, Kuznetsova broke back, and took a tightly contested tie-break, 7-6 (11-9). Thereafter the Russian strode to the win, 6-2, and will next play one of two Chinese wild cards in the third round.

But the most highly anticipated match of the day, perhaps of the tournament, would produce Kerber’s next opponent. It was between two unseeded players, No60 Eugenie Bouchard and the wild card Maria Sharapova.

The lack of seeding however should not mask the quality and the pulling power of these two women: Sharapova a four-time Grand Slam champion and former winner of this very Madrid event—indeed a 23-7 record here; Bouchard a Wimbledon finalist plus semi-finalist in the Australian and French Opens in the year she turned 20, 2014.

But the spice in the encounter came from the comments of the younger woman just a fortnight or so earlier, when asked her view of Sharapova being offered wild cards to tournaments on her immediate return from a 15-month doping ban.

“She’s a cheater,” Bouchard said. “I don’t think a cheater in any sport should be allowed to play that sport again. It’s so unfair to all the other players who do it the right way.”

She concluded: “She’s definitely not someone I can say I look up to any more.”

Naturally Sharapova, who went on to reach the semis of that first event in Stuttgart, was not impressed once their showdown was set in Madrid:

“I like doing my work. I love being quiet about it and letting everyone around speak or have the noise.

“I’ve been in the public eye since I was a very young girl. I’ve heard a lot of things. If everything affects you on and off the court, I think that would be a really challenging position to be in. My tennis speaks for itself.”

Judging from her opening three-set performance in Madrid, and the intensity that she brought to court, she would be as highly motivated for the encounter as Bouchard claimed to be.

They had actually played each other four times before, twice on the clay of Roland Garros, and Sharapova had won every time, dropping just one set.

This time, it was possible to cut the tension with a knife, the rallies were short and staccato, there were outright winners delivered with a scream of effort from Sharapova but almost as many errors. At times, the two women were mirror images, pacing behind the baseline both in preparation for serving and for receiving—small mini-dramas as each fought to keep composed.

Bouchard fought off a break point in the second game, Sharapova saved two in the fifth, sandwiching a double fault with two huge winners from the baseline. In the next game, she upped the aggression still further on Bouchard’s serve, cracked a return winner, and broke for 4-2.

But in the seventh game, Sharapova’s shot-making was erratic again: a double fault, and another break, and Bouchard was visibly growing in confidence. An error-strewn game, and Bouchard had another break to serve for the set, but the Russian crushed ball after ball to break again: 5-5.

The match was now generating all the intensity that it had promised, and the crowd was increasingly vocal. As the set extended to an hour, Sharapova faced four more break points and five deuces, finally conceding the key break, and Bouchard serve it out with a net put-away, 7-5.

Sharapova saved break point in the third game of the second set, and it was Bouchard who cracked under the pressure first, with two doubles faults contributing to a love break. A swift and aggressive hold from Sharapova made it 5-2, and to make her point, she broke once more, 6-2. The switch in momentum shone from the winner count in that set: 15-5 in Sharapova’s favour.

There was no loss of intensity in the third set: First Sharapova survived deuces, then Bouchard did the same as the match headed to two hours. Both survived 0-40 on serve, 2-2, and Sharapova survived another five break points in the fifth game, following it with a break to love.

Sure enough, though, Bouchard levelled again at 4-4, and made one final break. She would serve for the match, yet even that was not straightforward. Sharapova had the chance to break twice more, but could not do so, and would end the match with mere 5/15 break points—outdone only by her opponent on 5/21. But Bouchard finally got the job done, despite winning five fewer points overall and hitting half the winners, 6-4. It had taken two hours 52 minutes, and it had been gripping.

The next, between Bouchard and Kerber, could be just as gripping: the Canadian has beaten the top seed three times in five meetings, including both times clay. Exactly a year ago, Bouchard edged a cracker in Rome, 7-5 in the third. Stay tuned: it will be worth the wait.