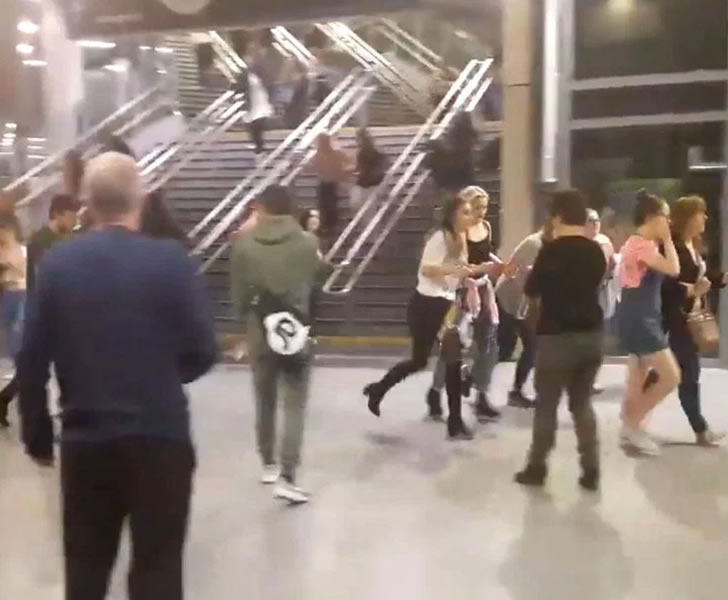 More than 20 people were killed in the Manchester Arena terror attack Photo: Twitter

Henrikh Mkhitaryan and Michael Carrick were among the Manchester United players to take to social media to send message of support those affected by the terrorist attack at Manchester Arena on Monday night.

Twenty-two people, including children, have been killed and 59 injured in a suicide attack at the end of a concert by US singer Ariana Grande.

Police said the loan male attacker detonated an improvised explosive device in the foyer as people left the venue following the concert.

The tragic event happened as Manchester United prepared for their Europa League final clash with Ajax in Stockholm on Wednesday night.

There was naturally an outpouring of tributes to the victims and their families on social media following the tragic events on Monday night.

Here are some of the latest updates from Manchester United players and the wider footballing community.

Manchester United posted an official statement on the club’s Twitter feed: “We are deeply shocked by last night’s terrible events at the Manchester Arena. Our thoughts and prayers go out to all those affected.”

Henrikh Mkhitaryan tweeted: “Stay strong Manchester! My thoughts and prayers are with all those affected by last night’s horrible attack.”

Midfielder Michael Carrick said on Twitter: “My thoughts and prayers go out to all those effected by the sickening attack that happened here in Manchester last night. 🙏🏻”

England legend Gary Lineker also had his say: “To target children at a concert is beyond comprehension. Beyond lunacy. Beyond evil. Heart goes out to all those who’ve lost loved ones.”

Joey Barton tweeted: “My thoughts are with all those families affected in Manchester. Despicable cowardice again, demonstrated by the targeting of innocents.”

And singer Ariana Grande was clearly devastated by the events. She wrote on Twitter: “Broken. From the bottom of my heart, i am so so sorry. i don’t have words.”

The Manchester United squad are due to train at the club’s Carrington complex on Tuesday morning before jetting off to Stockholm in the afternoon.

The Red Devils know that winning the final is their last remaining hope of Champions League qualification.

Jamie Redknapp: This Arsenal star has been a huge disappointment