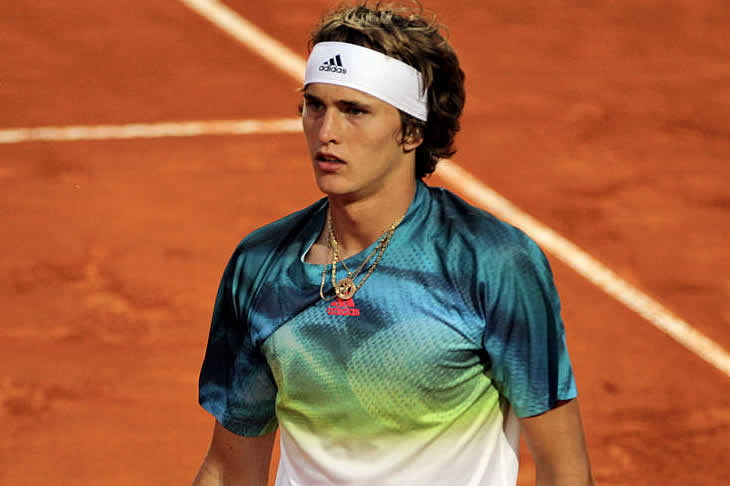 Alexander Zverev is through to the semi-finals in Rome Photo: Marianne Bevis

Between them, the highest remaining seeds at the Rome Masters, No2 Novak Djokovic and No4 Rafael Nadal, owned 11 of the last 12 titles. The only man to have broken that dominance, top seed Andy Murray, was already back in London having lost his opening match.

With former French Open champion and No3 seed Stan Wawrinka losing to John Isner and Marin Cilic beating the in-form David Goffin, both in the third round, and three-time former finalist Roger Federer bypassing the entire clay swing, it looked a sure bet that Nadal or Djokovic would go all the way again this year—though just as in Madrid last week, they would have to contest a semi-final to do so.

If the preceding months were anything to go by, Nadal was hot favourite even against Djokovic. The Spaniard was finalist at the Australian Open, Acapulco, and Miami, and swept through Monte-Carlo, Barcelona and Madrid without loss: 17-0 on clay, a tour-leading 36-5 for the season.

His case for reaching the semis certainly looked strong as he came face-to-face with the same man he had beaten in both the Barcelona and Madrid finals, No8 seed Dominic Thiem. But anyone who saw the young Austrian’s battle, against both Nadal and the home crowd, less than a week ago in his first Masters final would know only too well that there was a lot of fight and a lot of talent in the ever-improving 23-year-old.

The two first met in Roland Garros in 2014, Thiem just 20 but already with a main-tour final to his name and a win over Wawrinka. In 2015, still only 21, Thiem won three titles, and last year he made the semis at Roland Garros. By the time he reached the Madrid final last weekend, he had accumulated eight titles from 12 finals.

Thiem was also starting to score big: Last year, he beat Nadal on clay in Buenos Aires, beat Federer in Rome and Stuttgart—though the Swiss was visibly hampered by the knee injury that would force him out for of the year—and last month he beat Andy Murray in Barcelona.

Ill fortune, then, that he should face a resurgent Nadal for the third week in a row. However Thiem has been proving what a fit, powerful and quick-learning player he is, and perhaps he had watched videos of the aggressive tactics adopted by Federer in his three wins over Nadal this year. With the kind of one-handed backhand boasted by Wawrinka, Thiem certainly had the weapons on both wings to step in and take the game to Nadal, and he did just that.

He straight away was firing winners in all directions off both forehand and backhand, using cross-court angles, down-the-line pace and depth, and taking time away from Nadal at every turn.

He got a near perfect start, breaking the Spaniard in the opening game and holding for 2-0, but then he had done just that in Madrid five days ago. This time, however, Thiem stayed aggressive, clearly determined to control points and keep them short.

It was bold and exhilarating play, and it took him to deuce in the third game, with the packed central court gasping at the rip on the Austrian’s backhand. Nadal held, but come the fifth game, he was out-muscled from the baseline again, went 0-40 down, and a full-blooded forehand down the line from Thiem broke for 4-1.

The Austrian held for 5-1, but the former champion was stung into retaliation, and unleashed a couple of his signature forehands down the line to earn break-back points. Thiem got to deuce with his first ace but faced two more break points, and a wayward smash conceded a break to Nadal.

As Nadal clawed the score back, Thiem had to maintain his intensity, and he did, serving out the set, 6-4. The Italian crowd was riveted, and no matter that Nadal is such a favourite in this city: most rose to their feet to acknowledge the Austrian. But could he maintain this level?

Yes, came the reply, as he continued to pound his cross-court backhand wide to Nadal’s forehand wing. It drew errors, or opened the court for the follow-up forehand, but Thiem would have to wait to break, despite pressing hard in the third and fifth games.

Nadal again rose to the challenge, but could not build on a couple of deuces in the sixth, 3-3, and come the next game, Thiem found some extra magic, chasing to pick up a drop shot before running back, turning, and firing a remarkable backhand pass. It got a standing ovation, and two forehand winners later, he also had the break.

Thiem would then face his only break points of the set, helped by a nervy double fault, but he held. And rather than back-pedal, he went after Nadal with baseline-skimming shot-making to break for set and match, 6-3.

The arena rose as one, and rightly so. For if Thiem wins one more match to reach this third straight final, he will rise to a new career-high No6, though his quest gets no easier. Ahead lies Djokovic or del Potro: against the former Thiem has won just a single set in four meetings and again the latter, he has two losses, one by retirement.

But Thiem improves with every week. He told ATPWorldTour.com:

“I came in with a very aggressive game style, because I knew that if I wanted to have a chance, then I would have to do something different and be more aggressive…

“Today was one of these days where I really felt the ball great on the racquet, and a lot of risky shots went in. It was a very, very good performance and I think probably one of my best matches.”

He will have to produce more of the same against his next opponent, but there is every reason to expect he will.

The top half of the draw has opened up for an even younger rising star to impose himself. No16 seed, Alexander Zverev, already carries the burden of “possible future No1” on his shoulders, but at just turned 20, he bears such expectations lightly.

With confidence and poise beyond his years, he made the tennis tour sit up and take notice when, still age just 18, he held match point against Nadal in Indian Wells last year, only to net an easy smash. It was on the clay last spring and summer, however, that he made his move into the top 50—semis in Munich, the Nice final, and then the final on Halle’s grass.

His all-court power game transferred to the hard and indoor courts, too—semis in Washington and his first title in St Petersburg, beating the likes of Tomas Berdych and Wawrinka along the way.

He arrived in Madrid last week with two titles, Montpellier and Munich, and made the quarter-final, and was now into his third Masters quarter and aiming for his first semi.

He took on No5 seed Milos Raonic for the first time, and stuck like glue to the Canadian through the first six games. He then converted the first break point of the set, only to hand it straight back, and after another exchange of breaks, the two big men headed to a tie-break. Zverev was cranking up the winners and making fewer errors than Raonic, and that showed as he edged to set points, and served out, 7-6(4), after an hour of play.

By midway through the second set, Raonic was struggling as the errors rose to 28 and his doubles faults would tally six to just four aces. Zverev broke in the fourth and sixth games, and served out the win, 6-1, to take that next significant step in his career—and by the end of the tournament, he too is guaranteed a new career-high of around 14.