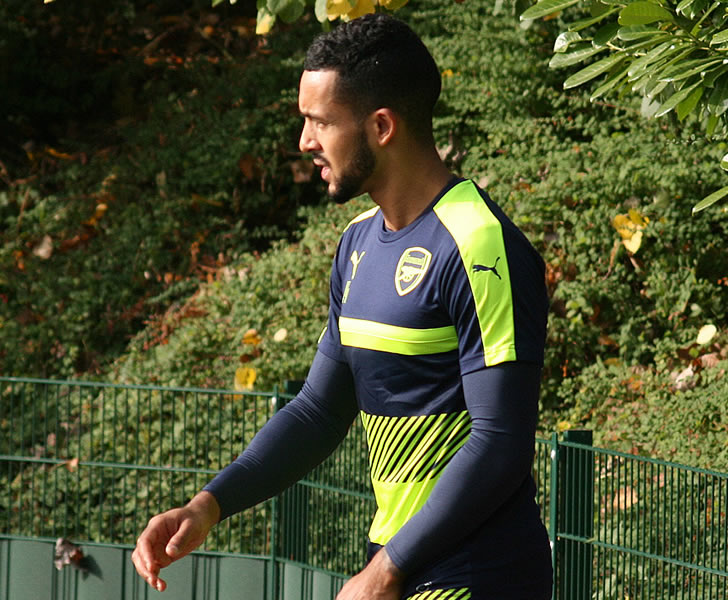 Theo Walcott scored a hat-trick on Saturday against Benfica Photo: The Sport Review

The 17-year-old continued his impressive pre-season form with a sparkling display down the right wing in the first half at The Emirates. While the rest of the Arsenal team looked to be struggling with fatigue, possibly from the jet-lag of having returned from their pre-season tour last week, Nelson was the bright spark in Arsene Wenger’s team.

He had the crowd on their feet with a number of pacy runs down the right wing and showed he wasn’t afraid to make a tackle.

Nelson was rewarded for his fine display when he notched up the assist for Olivier Giroud’s goal in the 64th minute with a fine cross.

Nelson recently revealed that Mesut Ozil has been mentoring him at Arsenal in recent weeks after the teenager impressed during the Gunners’ pre-season tour of Australia. It seems that the north London side could have another gem on their hands.

Issues at the back

The first half told some familiar tales for Arsenal fans, with the Gunners struggling in defence. The two Benfica goals scored before half-time – by Salvio and Franco Cervi – were carbon copies of each other.

On both occasions Rob Holding found himself with his face in the grass after failing to deal with the threat in front of him. Per Mertesacker, so solid during the FA Cup final win over Chelsea back in May, did little to help his young mentee in the three-at-the-back formation.

It remains to be seen which defensive set-up Wenger will select as his first choice next season, but there are clearly issues which need addressing. Holding was replaced by Calum Chambers at half-time and the Gunners looked slightly more assured. Laurent Koscielny did not come on.

Sead Kolasinac was given his first run-out for at the Emirates Stadium after joining the Gunners from Schalke on a free transfer at the start of the summer.

The 24-year-old left-back certainly showed plenty of attacking prowess in north London as the summer rain teemed down at The Emirates on Saturday.

He made his way into dangerous positions numerous times in the first half and provided an impressive assist for Theo Walcott’s equaliser in the 25th minute at The Emirates, when he deftly lobbed the ball into the winger’s path from the sideline.

Walcott still divides opinion amongst Arsenal fans. Most Gunners supporters would agree that he is yet to fulfil his potential at The Emirates.

The clock is ticking. Walcott is now in the prime of his career at 28 years old and although 10 goals in the Premier League last season was a decent return, he will need to step his game up to prove his doubters wrong.

We saw the best and the worst of the attacker on Saturday, as he started the game in sloppy fashion, highlighted when he horribly skewed a low shot wide of goal.

But he made amends as he gradually grew into the game and scored twice in the first half, albeit with relatively straightforward finishes. He then added a third to complete his hat-trick after his poor shot was deflected in by Lisandro. He left the pitch to a standing ovation with 15 minutes to go.

Arsenal fans will be hoping that Walcott can finally live up to his potential, although his story at The Emirates seems to be a rather repetitive one.

Alexandre Lacazette made his first appearance as an Arsenal player at The Emirates when he came on as a second-half substitute. Ozil was also given a run-out for the final 15 minutes as the Gunners continue their pre-season preparations ahead of their Community Shield clash against Chelsea next month.

The France international didn’t really get a chance to do much as he played in a three-man attack along with Ozil and Giroud.