Chelsea have made a surprise bid to try and sign Gonzalo Higuain from Juventus, according to reports 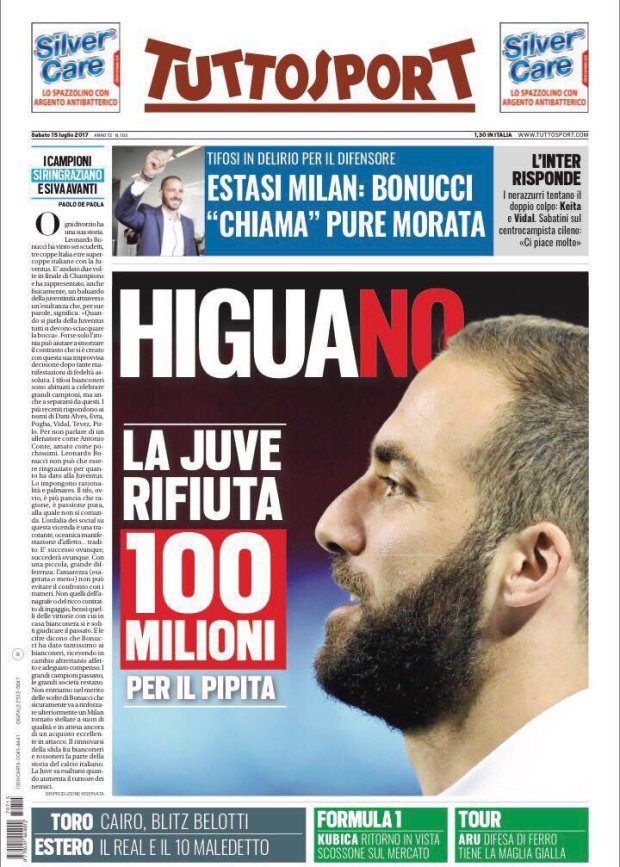 The story was published in Italian newspaper Tuttosport Photo: Tuttosport

Chelsea have made a surprise €100m (£88m) bid to sign Gonzalo Higuain from Juventus, according to reports in Italy.

Italian newspaper Tuttosport, as quoted by Metro, is claiming that the Blues made an approach to sign Higuain 10 days ago after losing out to Manchester United in the race to sign Romelu Lukaku from Everton.

The same report states that Juventus turned down the offer and that their director Beppe Marotta has insisted that Higuain will not be sold this summer.

Higuain was in good form for Juve last season, scoring 32 goals in 55 games and helping the Serie A side reach the Champions League final and win the Italian title.

Chelsea are believed to be on the lookout for attacking reinforcements this summer as the speculation about Diego Costa’s future at Stamford Bridge continues.

The Blues are gearing up to try and defend their Premier League title next season after they won the trophy in Antonio Conte’s first campaign in charge at the club.

The west London side will be likely to want to significantly bolster their squad this summer as they try to challenge on four fronts next season.