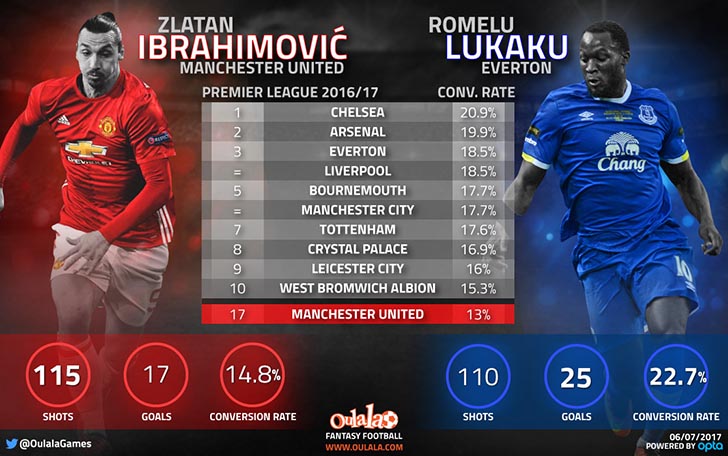 Romelu Lukaku’s future has been a source of relentless speculation this summer – and now Manchester United appear in pole position to sign the striker.

According to reports in the British media on Thursday, the Red Devils have moved ahead of the Premier League champions in the race to sign the 24-year-old striker and have agreed a £75m fee with Everton.

Oulala have released stats to prove that Lukaku would be a great addition to the Manchester United team as Jose Mourinho looks to transform the club into title challengers.

Manchester United finished in sixth place in the Premier League table last season as Zlatan Ibrahimovic scored 17 goals in 28 games in the 2016-17 campaign.

However, the Red Devils have since released the former Sweden international, but Mourinho has struggled to sign a replacement in the summer transfer window.

Manchester United scored 59 goals from 209 shots, which Oulala point out is a disappointing conversion rate of 13 per cent – the 17th worst record in the Premier League last season.

Lukaku, though, could help Manchester United to solve this issue given his 22 per cent shot conversion rate last term. Indeed, the Belgium international scored 25 goals from 110 shots, which represents a conversion rate of 22.7 per cent.

Given his impressive conversion rate with Everton last season, Oulala’s stats suggest Lukaku could be the perfect addition to improve Manchester United’s potency in front of goal.

Liverpool will only consider £88m offer for Brazil midfielder – report