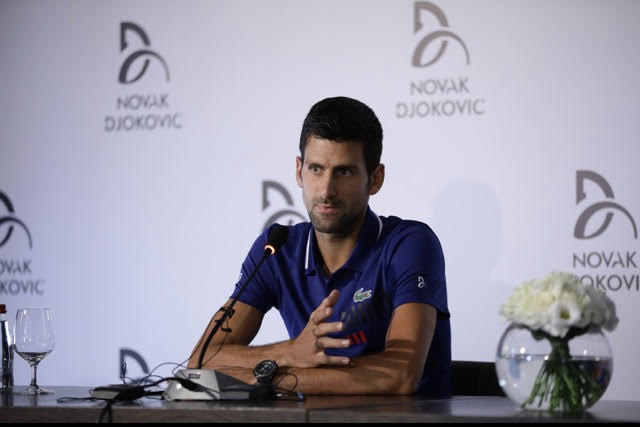 After more than a year of twists and turns, ups and downs, big wins and surprise losses, the 12-time Major champion, Novak Djokovic, has announced in a Facebook broadcast that he will miss the remainder of the 2017 season in order to heal a chronic right elbow injury.

The world No4, who was forced to retire during his quarter-final match against Tomas Berdych at Wimbledon earlier this month, addressed fans from Belgrade before attending a formal press conference, in what will be his last interview until further notice, according to the press release later distributed to the media.

Djokovic explained that he has been forced to take a compete break from playing, and thus will miss the US Open, drawing to an end his unbroken run at the Majors since the start of 2005—51 consecutive appearances. In New York, he has not fallen short of the semi-finals in a decade, winning two US Open titles from seven finals.

It will also bring to an end his 10 back-to-back qualifications at the World Tour Finals, where he has been champion five times.

The Serb has dominated the ranking, Majors and Masters scenes for much of the last six years. He rose to No1 with his first Wimbledon title in 2011, and would win 11 of those Majors, 25 of his 30 Masters titles, and accumulate 223 weeks at No1 from the start of that year until the end of 2016.

But the physical and emotional toll of maintaining such a level, and in particular winning the elusive French Open last year, began to show in the aftermath of Roland Garros: notably in his earliest exit at a Major, the third round at Wimbledon, in over seven years.

Djokovic battled to the end of 2016, missing the Cincinnati Masters and the Beijing 500—which he had won in the four previous years—but could not hold off the surge of Andy Murray to the World Tour finals title and the No1 ranking at the end of the season.

The Serb won the first title of 2017, in Doha, but not another until the modest Aegon International in Eastbourne, and he admitted at Wimbledon that he had been struggling with recurrent elbow pain since his Roland Garros triumph.

An apparent loss of confidence also saw a surprise split with his coaching team of a decade in the run-up to the French Open, followed in quick succession by the recruitment of Andre Agassi and Mario Ancic during the last month. And one positive during Djokivic’s announcement this afternoon is that Agassi is to remain in his camp:

“I’m happy to share that Andre Agassi is committed to stay with me next year, and I want to thank Andre for being with me this year and sharing his experience and wisdom.

“Andre was with me in Toronto [where Djokovic headed after Wimbledon], and he helped me find doctors, specialists in treating elbow injuries. During this short period, we’ve been getting to know each other and building trust and understanding. He supports my decision to take a break, and remains my head coach.

Djokovic then went on to elaborate on the physical implications of his injury.

“My elbow is hurt due to excessive playing, and it troubles me constantly when serving, and now when playing forehand as well. Unfortunately, such injuries are often encountered in a professional sport, and I am very proud of the fact that I have been free from serious injuries during all these years. I think I haven’t missed a single major event for more than 10 years, I’ve been reaching the final stages of the tournaments, and playing at the highest level. The remarkable series has come to an end. My body has its limits, and I have to respect that and be grateful for all that I have achieved so far.

“At the beginning of my career I was facing health issues, but with a lot of patience and dedication, I found a solution. That’s the approach I take to this situation, and I firmly believe that I will come back stronger.

“All the doctors I’ve consulted, and all the specialists I have visited, in Serbia and all over the world, have agreed that this injury requires rest. A prolonged break from the sport is inevitable. I’ll do whatever it takes to recover. I will use the upcoming period to strengthen my body and also to improve certain tennis elements that I have not been able to work on over the past years due to a demanding schedule.

“Five months may seem long from this point, but I’m sure they will pass quickly because there is so much I want to do.

“Another important moment is coming: My wife Jelena and I are expecting our second child. These are things that fill me with greatest happiness and delight.”

Despite admitting that he would not be able to use a racket for more than two months before his training could recommence, Djokovic ended his address to fans on Facebook on an upbeat note:

“I’m trying to see the positive side of this. In about a month and a half, hopefully Jelena and I, with God’s help, will become parents again. And obviously, I will take this time to heal.

“I am very grateful—the strongest emotion I have felt lately—that I kept my body heathy throughout the years. I haven’t had too many big injuries, so it’s a completely new experience for me, but I’m trying to see it from the bright side. I really want to play professional tennis for many years to come.

“Life is beautiful, guys: sending you lots of love.”

By coincidence, it was on this exact date a year ago that one of Djokovic’s greatest rivals, Roger Federer, announced his own withdrawal from the remainder of the season to rehab the knee that had undergone surgery six months before.

He was just about to turn 35, and few anticipated he would bounce back in such revitalised shape and form on his return, winning the Australian Open, Indian Wells, Miami, Halle, and then Wimbledon.

So beware the Serb in Australia 2018. Djokovic has, after all, won that Major more than any other: seven times. And he is still only 30.