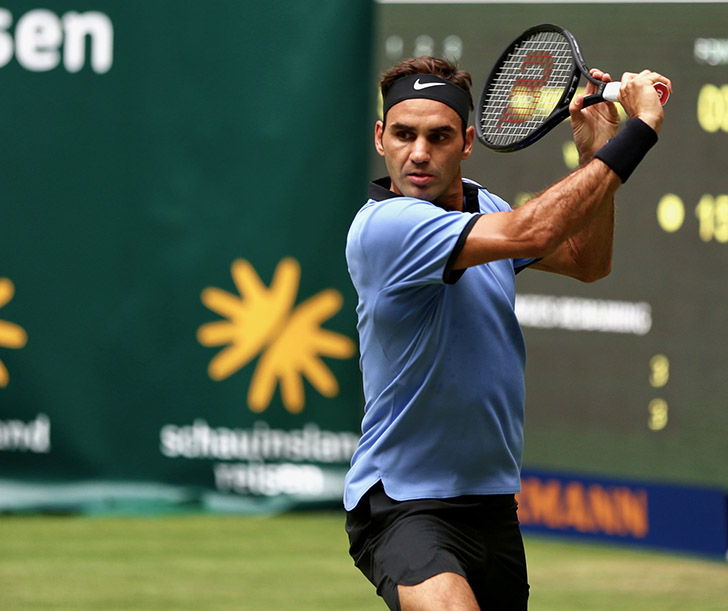 For the first time in 14 years, none of the semi-finalists in a Major would be ranked in the top four. That was just one of many unexpected outcomes at Wimbledon since the draw was made two weeks ago.

In fairness, that did not mean that none of the ‘big four’ was in contention. It was not defending champion and top seed Andy Murray, nor the man who won the two titles before Murray, No2 seed Novak Djokovic, nor the man who tops the Race to London, Rafael Nadal. It was the oldest of the quartet by far, world No5 Roger Federer.

It would, even so, be hard to find anyone who was surprised that the man who turns 36 in three weeks’ time, who first played here in 1999 and was now playing his 19th consecutive Championships, who had won the title seven times, who was hoping to extend his own record of match-wins here to 90, who had already set a new semi-final record here of 12, was among the last four standing at his favourite tournament.

Federer’s prowess on grass—he has more titles and more match-wins on the turf than anyone else—earned him a boost to the No3 seeding on the back of his ninth Halle title.

And if his record here and on grass were not enough to make him the favourite even before the tournament began, his record across the board since he returned from a six-month lay-off—a lay-off that began here at this very stage last year—made sure he was.

As No17 seed, he beat four top-10 men to win the Australian Open, he beat No3 Stan Wawrinka and Nadal to win Indian Wells. In Miami, he beat four top-20 men, including Nadal for a third time, and survived two third-set tie-breakers against Nick Kyrgios and Tomas Berdych, too.

He then took the bold decision to bypass the whole clay season—one of the reasons he remains outside the top four—and focused on grass. It worked, and although he cannot reach No1 even with the Wimbledon title next week, he could rise to No3, and be in contention to regain the top spot at the US Open. He does, after all, have no points to defend for the rest of the year.

The stature of the Swiss, then, suggested he was the man to beat. But the physical stature of the man could be the one thing to stand in his way. He put it thus after his quarter-final victory over the powerful 6ft 5in Canadian, Milos Raonic.

“These other guys are all big hitters. I feel like they will have their say in the outcome of the matches. They’ve got big serves, big forehands, big hitters really. All three guys are taller and stronger than I am. I got to figure out a different way, carve my way through the draw somehow with my slice and my spins, my consistency maybe.”

He referred, in the other semi-final, to 6ft 6in Marin Cilic and Sam Querrey, and to his next opponent, another 6ft 5in powerhouse of a man, Berdych. Federer is 6ft 1in.

Berdych, despite a slip in form this season to outside the top 10, had undoubted form on grass, and had stretched Federer to the limit many times in their 24 meetings. For while he had won in only six meetings, they had often been on the biggest stages: in their first at the Athens Olympics, at the US Open in 2012, and here at Wimbledon in 2010 when the Czech man headed to his only Major final.

He was perhaps helped, too, by coming into the contest reasonably fresh: Djokovic had been forced to retire at 2-0 in the second set of their quarter-final after just an hour.

Berdych certainly looked fresh, and ready to play more attacking tennis than ever before as he took to the baseline against Federer once more.

He resisted immediate pressure and a break point to hold a five-minute opener, and then turned that pressure on Federer.

The Swiss though got the first break in the fifth game with a couple of huge forehands and held to love for 4-2. But now Berdych opened up his forehand, too, and made some big inroads with his cross-court ripped drives. He got the break back, helped by two double faults from his opponent.

The usually calm Swiss looked more tense than usual, apparently rushed by the attacking tennis of the Czech. He looked ready to make a timely break, and fired a vicious forehand direct at the net-bound Berdych, but some clutch serving from the Czech resisted. A love hold by Federer took it to a tie-break, and with precision Swiss timing, he edged the first mini-break, and served out the set, 7-6(4).

The second set was also close. Federer continued to play some tight shots, his drop shots falling short on several occasions, and a double fault here and there. He could not convert a couple of break chances in the fourth game, but nor could Berdych in the seventh, and it headed to another tie-break.

This one followed a similar pattern: And initial lead for Federer as he cranked up four forehand winners in a row, 5-1, and then double faulted. A backhand error from Berdych, though, and Federer had this set, as well, 7-6(4).

The third, just as tight, saw chances come and go, but the Czech was playing big, coming to the net—he would do so 36 times in the match, more even than Federer—and catching the Swiss out with some fierce returns to his feet. Berdych was suddenly 15-40 up, but that brought out the best in Federer: three aces and a winning serve, 3-3.

Having survived his test, Federer turned the tables, ghosting to the net for a volley winner, and he broke. A couple of confident holds, and the match was his, 6-4, after 2hrs 18mins.

He afterwards denied that he was nervous for this one, though his body language at times in the match said otherwise. But he allowed that this had probably been his toughest test thus far:

“The breakers… I played good in the breakers, or at least if my opponent didn’t play well in the breakers, I was able to close it out. Never played with any sense of panic, which is so important when it gets to crunch time. So, yeah, it was the toughest match. I guess so, yes. It was close. I’m happy I won all these big points today.”

“So I’m in for a tough one. Plus, we had a great one here last year. Also at the US Open, he played unreal there against me.”

And certainly, Federer’s head to head with Cilic, 6-1, belies the truth of their contests. Few who saw last year’s three and a quarter hour five-setter in the quarter-finals will doubt how hard the Croat can press the Swiss. Cilic won the first two sets and had three match points before Federer pulled out a dramatic win.

And Federer was quick to mention the one defeat he suffered at the Croat’s hands, a swift and decisive win in the semis of the US Open in 2014:

“Last time we had a brutal match, I was two sets down. I had to get really lucky to win. Marin is a great guy, he’s a lovely guy, I’m pleased he is into his first Wimbledon final. [But] he crushed me at the US Open. I hope he doesn’t play lights out like he did then!”

If Cilic plays as he did today, and throughout the tournament, there is no doubt it could be another cliff-hanger. So Federer will need to shake off those nerves, which is no mean feat with a record-making eighth Wimbledon title within touching distance.

He confessed: “I hope I can play one more good match.”