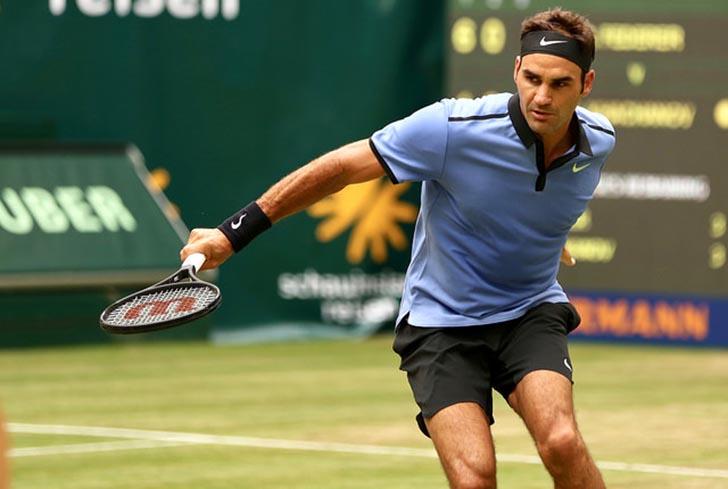 Roger Federer is through to the last four at Wimbledon 2017 Photo: Marianne Bevis

It has become so commonplace as to be routine, yet the stacking up of Roger Federer’s records is anything but routine.

Just by arriving to play at his 19th Wimbledon, he equalled the record for most Major appearances, 70. He already owned the most grass court titles, the most grass-court match-wins, and shared with Pete Sampras a record seven Wimbledon titles.

The Swiss extended his own record for Major match-wins across the board, and with his first-round win here, took ownership of the most Open era wins at Wimbledon, 85.

By reaching his 15th quarter-final here, he overtook Jimmy Connors for an Open era record, and extended his lead to a 50th Major quarter-final overall. Along the way, he hit his 10,000th ace, becoming only the third man since records began in 1991 to do so.

Now playing in his 100th match at Wimbledon, he was targeting still more milestones. Should he reach his 12th semi-final at the All England Club, he would top that list. At the same time, he would extend his lead for overall Major semi-finals with 42.

And to give these ever-growing statistics a little more context, Federer turns 36 in under four weeks’ time, and missed the bulk of the 2016 season following knee surgery. He thus did not qualify for the World Tour Finals for the first time in 15 years, and started this season ranked No17.

But the six months away brought a reinvigorated Federer with a retooled backhand and ambitions to return to winning ways, he said, by Wimbledon. In fact he beat a series of tough draws to win the Australian Open, Indian Wells and Miami, bypassed the clay season, and returned on the grass to win his ninth Halle title.

Now once again, he was being touted as one of the favourites to win his favourite tournament.

His problem, though, was a big one, the one that beat him in the semis here last year: Milos Raonic. The No6 seeded Canadian stands 6ft 5in tall, has a sledgehammer serve, and won both his matches over Federer last year. This would be their first since their three-and-a-half-hour marathon in that 2016 semi at the All England Club.

Federer’s intent was clear from the very start. Having opted to receive after winning the coin toss, he pressed Raonic hard in the third game. He got his reward in the fifth game, breaking swiftly, and dropping only one point on his first serve in the set. He held with an ace, 6-4, after 31 minutes.

The second set flew by even more quickly. Federer broke immediately with that new backhand weapon, a ripping pass, and then with another down the line, held for 2-0. In no time, he was another break up and leading 5-1, and the crowd was entering into the free-hitting spirit of the tennis, cheering every winner. A final love hold, and Federer had the set, 6-2.

At last, in the third set, Raonic seemed to get more purchase on the match, and it was Federer who faced the first break point. He aced and held, and made a couple of love holds on his way to the eighth game. There, the Swiss came under the heaviest pressure of the match, not helped by two double faults and a drop shot into the net.

He would face four break points and five deuces before holding, and Centre Court erupted, but there was no turning Raonic yet. But he would not get another crack at the Federer serve until the tie-break—by which time the news had flashed up on the scoreboard that Novak Djokovic, the expected opponent for Federer or Raonic in the semi-final, had retired against Tomas Berdych at a set and 2-0 down.

Djokovic, who had the chance to regain the No1 ranking if he won the title, now that Andy Murray was out of contention, had struggled throughout the first set against an opponent he had beaten 25 times in 27 previous matches, but ongoing shoulder and elbow problems proved too much for the Serb.

“It’s the elbow that already kept bothering me for over a year and a half… But I tried what I could do from yesterday to get it in the condition where I’m able to play. I was able maybe, you know, for 30 minutes to play with some pain that was bearable… The serve and forehand were the shots where I could feel it the most. Just after that, there was really no sense.”

Federer therefore could become the only one of the ‘big four’ to make it to the last four, but first he had to hold off the power play of Raonic in a tie break.

It did not start well for the Swiss as the Canadian cracked down a 136mph ace and then won both points on Federer’s serve, 3-0. But the Swiss stepped in to hit an astonishing return of serve winner to level things, serve-and-volleyed twice, and made a running forehand pass onto the line for 5-3.

A 137mph ace from Raonic merely delayed things, and Federer served it out, 7-6(4), in just under two hours.

The seven-time champion has yet to drop a set in the tournament, and his performance against Raonic was perhaps the most sparkling so far: 46 winners for nine unforced errors, 12 out of 13 serve-and-volley plays won, and 11 aces—the same as his big-serving opponent.

There is no doubt that, in contrast with the Australian Open, where Federer’s ranking ensured he had to beat four top-10 players, including old rival Rafael Nadal, to win the title, the draw here has opened up in an unexpected way. He could reasonably have expected to face the top two men in the world if he reached the final.

So if that next big record is to fall come Sunday, Federer will have to find more of what he produced in match No100. But if confidence is the key, he will be ready:

“The grass court season [last year] was difficult because of the back issues I had, and the knee issues. I was really lacking practice. Then the matches, I could never really play quite so freely last year just because I’m more focused on how the knee’s behaving rather than how I need to hit my forehand or backhand, or what’s not going to be good for my opponent.

“This year I’m just a normal tennis player again where I can focus on tactics. I think that’s the difference. I’m playing very well. I’m rested. I’m fresh. I’m confident, too. Then great things do happen. Confidence is a huge thing”.