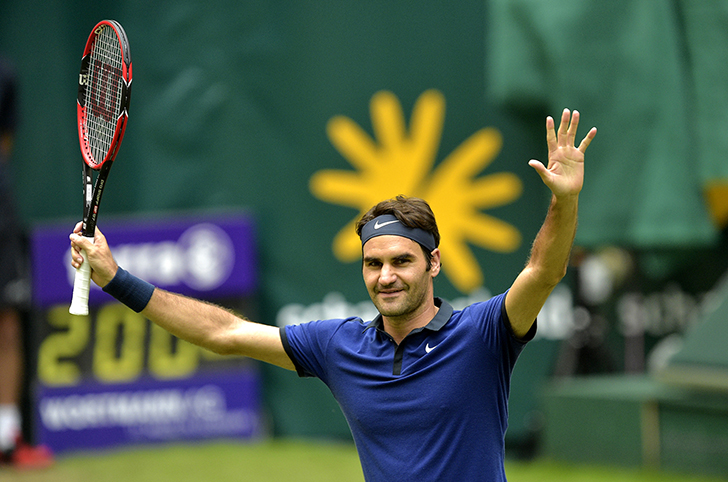 Roger Federer is through to the last 16 at Wimbledon Photo: Marianne Bevis

It is hard to say what the odds were that, only a fortnight or so after the brothers Zverev each faced their idol Roger Federer on the grass of Halle, they would again have the possibility of doing so—this time at Wimbledon.

Mischa and Sascha Zverev are the first pair of brothers to reach the third round at the same Wimbledon in 33 years, and the way the draw was panning out, there was even the possibility that the brothers could play one another for the very first time, and in the quarter-finals no less.

A rare opportunity indeed, and one that perhaps neither would have considered likely, given that, this time last year, the 29-year-old Mishca was ranked outside the top 150 while his rising-star teenage brother Sascha was already seeded at Wimbledon. Mischa lost in the first round of qualifying.

But aside from a couple of non-tour encounters while the now 20-year-old Sascha was a junior, the brothers Zverev had become far more accustomed to playing on the same side of the net in a decent doubles partnership.

Yet years ago, Mischa’s career looked almost as promising the young Sascha’s has become: He reached 45 in the rankings at the age of 21 before a wrist injury saw him sink outside the top 1,000 in 2015 and barely climb inside the top 200 18 months ago.

Despite the different trajectories their careers took and their 10-year age gap, though, the brothers credit each other with much of their success. Talking early last year, Sascha—Alexander—said:

“We really support each other. Mischa helped me with my breakthrough. He’s been on the tour for so long and told me so many things about the players.

“When I was 12 years old, I had to make a decision, and there was not really any doubt that I would be a tennis player.”

But he went on to elaborate. Asked about who his idol was, he said simply: “Roger”.

“I mean Roger is my brother’s favourite player by far, so whatever your brother likes, you like. Also, when I got to know [Federer] a bit on the tour, he’s even more my idol now.”

Which made it something of a coup for the younger brother to meet and beat Federer on home soil soon after, and the younger Zverev has gone from strength to strength, breaking into the top 10 this May with the Masters title in Rome.

In turn, then, that younger brother has inspired the older Mischa, who has this year also gone on to reach new heights in the rankings, currently 29.

His old-fashioned, left-handed net-attacking tennis took him past top seed Andy Murray and into his first Major quarter-final in Australia. Then in early summer, he came through qualifying to reach the Geneva final, beating Kei Nishikori and not far from beating top seed Wawrinka, too.

He reached the semis on Stuttgart’s grass, which gave him the chance to play Federer again in Halle. It was their second match of the year, and it was a significantly closer score than the previous time they had met in Halle. Then, Zverev won no games: this time, with a concerted attack against the Swiss, he took it to a tie-break in the first set, losing out 6-4 in the second.

Federer would go on to meet the younger Zverev in the final of Halle and impose himself afresh over the German star, 6-1, 6-3: It won him his ninth title at the tournament.

The elder brother, before this third stab at beating an in-form Federer who is after his eighth title at Wimbledon, thought about what he could do differently this time.

Already the Swiss was impressed by the variety he brought to the their matches this year:

“I have played him on several occasions now, and he’s played me different every time. In Australia, he played me really close on the second serve and would try to attack me. Whereas in Halle he played from way back, which is highly unusual on the grass. So I guess I don’t know quite what to expect in the match on Saturday.”

Zverev played his cards close his chest—with a smile!

“So how do you approach matches against Federer at Wimbledon? I’ll maybe give him a mean, angry look before the match….”

What he did do was come out all guns blazing, and that means big-time tennis. Zverev is a tall and powerful man, and follows his big serve into the net at every opportunity. There, he is confident and effective, using skills that have clearly been honed in all his doubles play.

It takes Federer’s style of play to Federer, and although the Swiss broke quickly with his new-model attacking backhand, and held to love with two aces, 4-1, he got caught out at the net with a couple of vicious returns to his feet to concede the break back.

Both then served almost perfectly until Federer found himself facing another break point in the 11th game. He held it off, and they headed to a tie-break. And rather as he had against Dusan Lajovic in his previous match, Federer reeled off the points to its 7-3 conclusion.

Zverev did not back off one inch, though, taking to the front of the court, forcing Federer to serve and volley precisely, but also to pull off passes from the back of the court. It made for explosive points and shot-making, and the winners tally cranked up as both men found some of their best tennis.

The speed of Zverev’s game seem to inspire Federer’s own attack, and he pounded a couple of return-of-serve winners in the third game to break. This time, Zverev, despite making few errors, could not find a loophole to break back. The set was done, 6-4.

The pattern was almost identical in the third set, a break in third game, and some spectacular rallies between the two on the way to a hold, 3-1. The crowd roared and cheered point after point: this was after all a Saturday night and the last match of the day.

Federer’s serving was now faster and sharper than it had been throughout. He held to love—ace and forehand winner—and come the decisive game, there was no hesitation: a love hold with three winning serves and a serve and volley.

The statistics, even if on the generous side, spoke volumes for the style and standard of tennis played. The style, attacking and explosive, produced 20 winners from Zverev and 61 from Federer. The standard at which they played ensured their unforced errors remained a staggering nine and seven respectively. And between them, they had won 57 points at the net. It was, in short, what grass-court tennis is all about.

A snuffly Federer was into press in five minutes—and his cold getting better each day, he assured one questioner. But he went on to talk about his brand of tennis:

“I feel like with the eye and with the quickness of the reaction of the body, understanding which balls you can attack is really important. I think I did that very well when I was younger. I was able to build on that by working on my fitness. My eyes have always been there to help me out in that regard. You know, especially even more so where I tried to finish the points earlier today. I think that explosiveness is crucial for me to be successful.”

He next plays a familiar opponent, the similarly single-handed Grigor Dimitrov, who has yet to drop a set: his opponent Dudi Sela retired after two sets today. The charismatic Bulgarian was a semi-finalist here three years ago, and Federer anticipates a tough match:

“He’s in the prime of his career right now. I expect that every time I have played him he has become better.”

And what of the younger Zverev? Well like his elder brother, who had only ever won one match at Wimbledon before, he broke new ground. Alexander will play in the second week of a Grand Slam for the first time after he beat Sebastian Ofner, 6-4, 6-4, 6-2. He next faces last year’s losing finalist, Milos Raonic, who beat No25 seed Albert Ramos-Vinolas.

One more win on for Zverev Jr and Federer—at 35, an almost-senior—and the two will face off again. And you can be sure older brother Mischa will be there to watch.