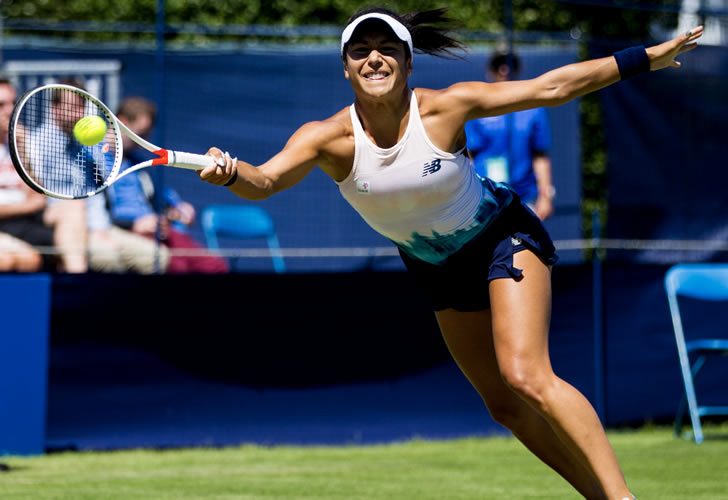 There has been no getting away from it: the impression being made by former world No1 and two-time Grand Slam champion Victoria Azarenka has been sky-high since she arrived at Wimbledon.

Azarenka, a two-time semi-finalist here, did not play last year due to injury, and would not play the rest of 2016 due to pregnancy. She had her son at the end of December, and although she planned to return for the US Open hard-court season, her training and fitness had gone so well that her coach encouraged her to return sooner.

She duly played her first match in Mallorca, won it, but lost in the second. But come Wimbledon, she looked fit, relaxed and completely at home.

First she was galvanised into action from a set down against talented teenager Cici Bellis, then she worked through the No16 seed Elena Vesnina, 6-3, 6-3, and that earned her the Centre Court against Briton Heather Watson.

Popular Watson was enjoying her own return to form after slipping outside the world’s top 100 this year. The former world No38 had slipped down the rankings following illness, injury and a loss of confidence, and so needed a wild card for Wimbledon, but after making the finals in the ITF event in Surbiton, she reached the semi-finals at Eastbourne, too.

Once here, her confidence seemed to grow before her British fans’ eyes, and she beat No19 seed Anastasija Sevastova for the loss of only four games in just 61 minutes. Now she had the chance to reach the second week at Wimbledon for the first time, and was revelling in her form.

“I mean, I just love it here. I think it’s obvious. I always want to do well. If there’s one tournament that I could pick to win, it would be this one. And just the atmosphere, being at home, on the grass, which is one of my favourite surfaces.”

Her problem was Azarenka, a woman who had beaten her in all four previous matches: Watson had won only 11 games in those four encounters combined.

But the British woman was not going to let that put her off going for her shots. On the very first point, she lobbed the tall Azarenka and then passed her with a backhand winner. It won a roar of approval from the crowd, setting the tone for the match.

It did not stop there, either. After holding with a forehand winner, she broke serve as Azarenka smashed an overhead long. Another hold, with some fine baseline shot-making, and she led 3-0.

She kept pressing, forcing deuce in the sixth game, but a string of errors handed the break back in the seventh.

She was unfazed, and went after the Azarenka serve, drawing one double fault and breaking for 5-3. She held on this time, serving out the set 6-3, in just 34 minutes.

But Watson went off the boil in the second set, especially on serve, and Azarenka began to pounce on the Briton’s second delivery. The Belarusian broke in the second game, and survived two double faults and a break point in the third for a 3-0 lead.

Watson came through a tough fourth game to hold, but Azarenka was looking stronger and more confident with each point. She broke again, and although Watson worked a break-back chance, Azarenka held onto serve, 6-1.

The decider would be the best set of all, as each battled to hold control. Watson came under severe pressure in a long third game but held, and then her serving level rose significantly for a love hold, 3-2.

But come her next serve, she had to find her boldest tennis. A big volley winner held off the first break point, and six times she faced deuce before Azarenka finally got the breakthrough, 4-3.

Watson, the ultimate hustler, was still not done, and she broke straight back to a tumultuous roar from the crowd. But Azarenka is the ultimate fighter, and she would not back down. Facing two more break points, Watson was given a harsh time-violation warning, missed her first serve, and Azarenka punished the second with a forehand winner. She would serve for the match on the dot of two hours.

There would be drama to the bitter end. A nervy double fault from Azarenka and two winners from Watson brought up two break-back points, but she could not convert—though was denied a challenge that went down as an ace when Watson’s appeal was not spotted by the umpire.

In fairness, Azarenka was overall the better player, certainly won more points, and backed up her famed mental resolve with some impressive attack and not a little defensive energy.

Her task now gets a whole lot tougher, though, in the shape of one of the favourites for the title, Simona Halep, who could end the tournament with her first Major and the No1 ranking.

Until this year, he had never won a tournament in five finals and a dozen years of trying. This year, he began his season with one title, in Sydney, and then his second in s-Hertogenbosch. Along the way, he made the final in Estoril and the semis at the prestigious Queen’s.

Now, he had reached a career-high 26, earned his first seeding at Wimbledon, and was aiming for his very first fourth round at the Championships.

It so happened that one of Bedene’s two meetings with Muller had come during that s-Hertogenbosch run, a close three-set loss. This time around, Bedene survived a long and gruelling five-setter over Karlovic, but Muller had taken five sets to come through his second match. Would fitness come into play? Would Muller’s big serve and volley game subdue the nimble, quick game of Bedene?

In the first set, there was little in it. They exchanged breaks midway through, but both seemed to be serving perfectly as they headed to a tie-break. Muller then took command, serve and volleying for 4-1, but Bedene pulled off a fine cross-court pass to level, 4-4. Muller, though, ran away with the last three points, 7-6(4).

Bedene started the second set with a flourish, breaking Muller with a superb lob winner, but the older man broke straight back, and broke again to serve out the set, 7-5. And after almost two hours of play, Muller pounded through the third set, 6-4, bringing his tally of serve and volley points up to 25.

Muller’s dream continues, then, and his next match, in the second week, looked set to be on Centre Court: It would be against either former champion Rafael Nadal, bidding for the No1 ranking this fortnight, or 21-year-old Karen Khachanov.

Bedene was disappointed at the loss but full of expectation for the rest of the year:

“My aim is to get into the top 30, to be seeded at the Australian Open next year. I don’t have too many points to defend till the end of the year because last year wasn’t great. I just have to improve my game. At the moment, I’m enjoying playing tennis. That’s what’s important.”

That pleasure has shone through this week, as he enjoyed and responded to some huge home support here. He rises 11 places with this third-round run, and No30 does not sound at all out of the question.

Evergreen Federer, Djokovic and Sela prove age is just a number on way to Wimbledon round 3