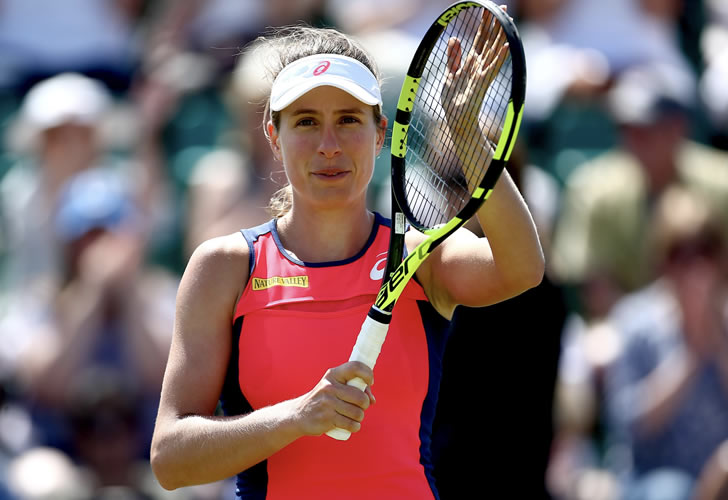 British No1 Johanna Konta is into the semi-finals at SW19 Photo: Marianne Bevis

Johanna Konta will look to become the first British woman since Virginia Wade to reach the Wimbledon final on Thursday.

The 26-year-old Australian-born British number one is closing in on her own slice of Wimbledon history with her run to the semi-finals at the prestigious grass court tournament.

However, Konta will face five-time Wimbledon champion Venus Williams for a place in the SW19 final in what represents the biggest match of the Briton’s career so far.

888sport are pricing Konta at around 13/1 to win the Wimbledon title, while Williams is priced at rather generous odds of 24/1.

The world number seven has been in a rich vein of form at Wimbledon so far, starting with a 6-2 6-2 victory over Taiwan’s Hsieh Su-wei in the first round in the English capital.

Konta followed up this result with a three-set victory over Donna Vekić, digging deep to win the third 10-8 and avoid what would have been an upset for the British number one.

Indeed, the 2016 Australian Open semi-finalist put on an assured display in a 6-4 6-1 win against Greece’s Maria Sakkari to set up a last-16 match with 21st seed Caroline Garcia.

As expected, the Spaniard proved a difficult opponent and Konta required three sets to get past her fellow seed and book her place in the Wimbledon quarter-finals.

Next up was former world number one Simona Halep. Konta looked in big trouble against the Romanian after dropping the opening set for the first time at Wimbledon this year.

However, in what was an encouraging sign ahead of her battle against Williams, Konta battled back to 6-7 (2), 7-6 (5), 6-4 to reach her first Wimbledon semi-final.

Tenth seed Williams has taken over the mantle from youngster sister Serena in this year’s tournament with last year’s champion currently out-of-action due to pregnancy.

Ominously, the 37-year-old has only dropped one set the 2017’s third Grand Slam so far to coast to the semi-finals for a tenth time in her decorated career.

China’s Wang Qiang is the only player to have taken a set off the older Williams sister, with the American comfortably dispatching 28th seed Ana Konjuh and Latvia’s 13th seed Jeļena Ostapenko.

However, Konta can take encouragement from the fact that Williams hasn’t won Wimbledon since her fifth title in 2008 when the 37-year-old beat her sister Serena in three sets.

Given the amount of time that has passed since her last success, Venus will have to contend with a certain amount of nerves knowing that this could be her final chance to win a sixth Wimbledon crown and move to within one title of her sister’s tally.

For those doubting Konta’s chances of beating Williams in the semi-final at SW19, it is worth pointing out that the British number one has won three of their five meetings on the WTA circuit.

However, Venus did emerge victorious in three sets in their most-recent match in Rome earlier this year. However, Konta will fancy her chances on the quicker Wimbledon courts.

Sport stars and celebrity gamers that are into League Of Legends

Wimbledon 2017 and sporting chokes: The science behind athletes and bottling