Wimbledon 2017 and sporting chokes: The science behind athletes and bottling

A large part of sport’s mystique and fantastic appeal is the potential for an upset, but what is the science of choking? 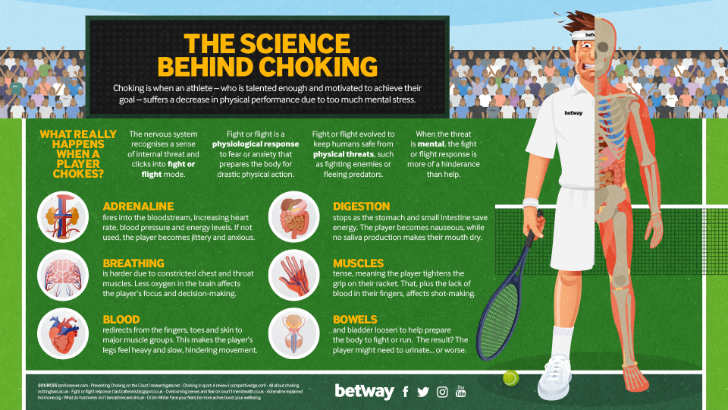 The science behind athletes choking in big events Photo: Betway

With the action coming thick and fast at Wimbledon this week, things have not gone quite as planned in the men’s competition.

The game’s top four enter every tournament as favourites to progress to the semi-finals, with a battle between the supremely talented quartet usually ensuing to be crowned champion.

However, a large part of sport’s mystique and fantastic appeal is the potential for an upset.

While this may be down to an underdog lifting their game and shocking the favourite, on plenty of occasions it can be due to the established star choking.

With Wimbledon now at the semi-finals stage, two of the hot favourites, Andy Murray and Rafael Nadal, have been unexpectedly eliminated.

The Betway Insider explained the choke perfectly in this infographic and it is fair to say that physiological factors playing a part in both of the tennis superstars’ downfalls.

Nadal was highly fancied to breeze past little-known Gilles Muller, but the Spanish clay-court king was forced to play out a mammoth fifth set.

With the players unable to be separated, it took a massive 28 games before the Luxembourg star prevailed 15-15 in the final set, winning the battle of wills to progress to the quarter-finals.

When it comes down to such fine margins at the top level of sport, physical and technical abilities can be relegated to secondary priorities, with mental fortitude and holding one’s nerve becoming the decisive attribute.

In this case, the usually steely Nadal succumbed to a determined Muller, with his subsequent gripe of not playing on centre court seemingly a ploy to detract away from the fact that he had lost the war of mental attrition.

In Murray’s case, after winning the first set against American Sam Querry in 28 minutes, it looked odds-on that the world number one would book his place in the semi-finals.

However, a hip complaint limited the Scottish player’s movement as the match progressed – and his opponent took full advantage.

While it is fair to say that Murray was not at his usual physically powerful self, it was evident that doubts crept into the defending champion’s game, with his belief diminishing in front of the capacity crowd and the millions of television viewers.

Although the British star was limited in his movement, Querry was buoyed on by his growing success in the fourth and fifth sets, with Murray losing his confidence and subsequently all-but conceding the game to the big-serving American in the final half-hour.

While all of sport’s top stars and teams have ability in spades and can win a contest through a moment of brilliance, when the going gets tough it is the mental fortitude to prevail that dictates the victor by the finest of margins.

In the case of Wimbledon 2017, while the eventual winner will be heralded in the men’s competition, a lack of nerve from both Nadal and Murray may well be vivid sub-plots when the tournament is recollected in years to come.

Tottenham must show defiance to maintain place among England’s elite